Forget You Ever Heard the Words "Low" and "Fat" and "Diet" Together
Recently I saw an article about a chef who has created a low-fat Mediterranean diet. Until now, I really did think that I had heard it all, but this is just so utterly bizarre that I sat stunned, staring at my computer screen for a minute or so. If ever there was a contradiction in terms it is the words "low-fat" combined with "Mediterranean diet." Reading about this chef, it's clear that this is another of those people who simply don't understand anything about nutrition.

Protein Really Satisfies
It does appear from several studies that it is the protein in your meal that helps you feel fuller and more satisfied, for longer than you would if you ate a meal with less protein. This is one of the reasons that my recommendations for a healthy breakfast consist of a starch, a fruit and some protein - that protein helps you avoid the lure of the doughnuts in the break room. 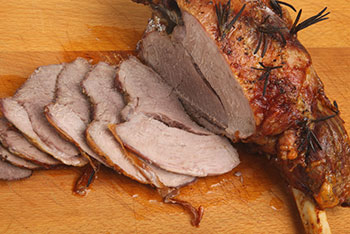 There is still a great deal of controversy about what fad diets. Recently I reported on a study that followed participants and compared four different diets for a full year -- Atkins, Zone, Ornish and LEARN. (Yes, fad diets work, but.... 3/07/07) While those on an Atkins type diet did better with weight loss, there remains concern about how they affect people's health when they follow such diets for a long period of time. In one study that I reported on there was no difference in long term development of heart disease in those eating a low-carbohydrate diet (Low-Carbohydrate Diets and Heart Disease 11/14/06). This was from data collected as part of the Nurses' Health Study.

There is conflicting data, however, and a long term study reported on in this month's issue of the Journal of Internal Medicine (J Int Med 2007;261(4):366-374), a group of scientists from Greece, Sweden and the U.S. evaluated data collected as part of The Women's Lifestyle and Health cohort. Data was gathered on over 42,000 women in Sweden, beginning in 1991, with their diets analyzed as part of the research.

The results are interesting in that those women who ate a diet higher in carbohydrates and lower in protein had lower death rates. Higher death rates for those eating a low-carb diet were more pronounced in the group who were 40 years of age or older at the beginning of the study. The primary cause of death in that group was from heart disease.

The main difference between this study and the Nurses Health Study is what was measured. As noted the Swedish research focused on death rates from all causes while the U.S. study used only heart disease as the main measurement. A third study performed in Greece with both men and women supports the findings of the Swedish research.

This debate is not over but we do have better and better research on eating healthy. This much we do know: a Mediterranean style diet results in lower rates of illness and death in long term studies. Diets such as Atkins, The Zone, Ornish and South Beach are difficult to follow and don't reflect good food. It's easy to eat healthy and eat great food by following the basics of a Mediterranean diet.