How to eat healthy while traveling 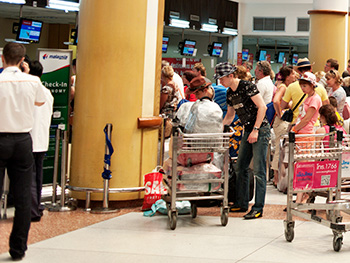 I will often have patients remark on how they can't eat healthy while they're traveling. This comes from people who only travel occasionally, for pleasure, as well as those who make a living on the road. Just like at home, planning is the key to eating healthy on the road. Thinking about what and when you are going to eat beforehand makes all the difference.

I spend a fair amount of time traveling, both for Dr. Gourmet as well as for pleasure, and not long ago attended a wedding in California. As with other travel, weddings are an opportunity for overindulgence, but you can eat well and eat healthy with a bit of planning. My recent trip to California is a good example of this planning.

When I am traveling I always focus on breakfast because it really is the most important meal of the day. On the morning of this trip I prepared a bagel with a little light cream cheese and jam and ate it on the plane. I took a banana and some orange juice with me as well. By making sure to eat a good breakfast, it's less likely that you'll become hungry later in the day and end up eating whatever comes your way.

While this is a guideline that's not much different than when you're at home, it's especially important when traveling. The mornings that I was in the hotel I made sure to get up a little early to have breakfast. One morning I had a fantastic bowl of freshly made steel cut oatmeal under the great rocky hills of Yosemite.

Lunches can be a challenge because most of us will just jump into a fast food joint and eat what's quick. Eating breakfast helps avoid this, but with advance thought you can be prepared for something healthier. Subway is an O.K. choice and they have the amount of fat and calories in their sandwiches listed in the restaurant. Choose their whole wheat bread for your sandwich.

I was lucky to be at the hotel and their lunch menu had some fairly good choices, including a cheese and fruit plate and some fantastic salads. I had a pita wrap filled with a red pepper hummus and fresh veggies. It really was one of the best sandwiches I have had in some time (and some terrific iced tea -- must be something about California and tea drinkers). Most restaurants have healthy choices; it just takes time to read the whole menu and make the right choice.

Dinner can be much easier than any other meal. I love eating fish when I am traveling. My first dinner out was in the restaurant of a motel where some of the family was staying. It was an unassuming place and I was a little concerned that I wouldn't find anything healthy (or very tasty). There was, however, a baked salmon dish with onions on the menu, and when I ordered it I was pleasantly surprised at how good it was. It came with a baked potato and broccoli. Often potatoes are huge and I end up leaving about half of them on the plate, but this was actually of reasonable size. The broccoli was terrific: freshly steamed and still crisp.

The other dinners were part of the wedding festivities. One was a buffet and this can be a minefield for anyone who's trying to eat healthy. The first rule of surviving a buffet is take one meat, one starch and one veggie. I chose the roast beef. It was lean and very good. The starches were corn muffins and potato salad. I never eat potato salad from a buffet (or anything with mayonnaise in it) because it can be so easily contaminated, so I chose the corn muffin and some salad. This turned out to be an excellent meal.

The wedding dinner was really good. At a seated dinner I always make the fish choice. Again this was salmon, but done quite nicely with a light red sauce. Eating meals at seated dinners or in restaurants can often be full of fat and calories. Having only half of what is on the plate is a good rule of thumb if the meal looks like it is not as healthy.

The best meal of the trip was at the lodge where I was staying. A well rated restaurant turned out a lovely Asian flavored seared tuna with baby bok choy, mushrooms and veggies.

I always make sure to travel with snacks. These might include fruit, nuts, granola bars, dried fruit and nut trail mix and bottles of water. When the snack on the plane is offered I always have something better for me (that also tastes a lot better).

I will say that on this trip I did something that I have not done in years and years. Many of my friends will be shocked at my admission, but I did eat a fast food hamburger. I have wanted to try an In 'N' Out burger since reading the book Fast Food Nation by Eric Schlosser. In 'N' Out is a family owned chain that makes their burgers from freshly ground beef and is reported as being very careful about their ingredients. They also treat their employees well.

While it was not a fantastic hamburger, it was certainly the best fast food burger I have ever had. It actually tasted like beef instead of the mystery meat at every other fast food joint. There's a fair amount of salt in the burger, at over 600 mg, but at just over 300 calories (I had them hold the "secret sauce") and 10 grams of fat, it wasn't too bad a choice for lunch (and it was delicious). The iced tea was again fantastic.

The simple key is planning. Eat breakfast, plan for lunch, use the Dining Out guide for dinner and be prepared with healthy snacks. Think about where you are going and what you are going to eat ahead of time. You can eat great food and eat healthy on the road.