What are legumes, and why are they good for you?

Legumes in the Mediterranean Diet 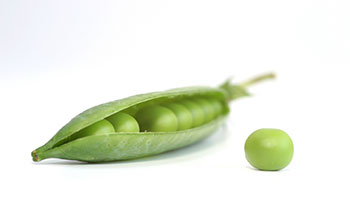 The word legume refers not only to the species of plants, but also to any fruit that grows seeds lined up in a pod. (I find it interesting that peas and black beans are actually considered to be fruit.) Also known as pulses, legumes include beans, soybeans, lentils, peas, peanuts, snap beans, and any edible pod such as green beans, pole beans, and okra.

Legumes are full of protein and fiber, but most of their calories come from carbohydrates. Because they are starchy it is easy to make them part of your meals in place of pasta, rice or potatoes.

I believe that these little guys are one of the most powerful additions you can make in your diet. One study of 10,000 men and women showed that eating a single serving of lentils or chickpeas per week dramatically reduced the risk of heart disease. The cool thing is that the more you eat, the lower your risk. The research showed that having legumes four or more times per week reduced the risk of heart disease by 22%. Twenty two percent! That's huge! And all you have to do is have a peanut butter sandwich on whole wheat bread for lunch every day.

We also have great evidence showing that soybeans and soy products prevent not just heart disease but cancer too. There has been controversy about whether soy might increase the risk of breast cancer in women, but recent research shows that this is not the case. It may be that more soy in your diet actually helps to prevent breast cancer. This is true for other cancers also. One research trial showed that people eating the most beans had 65% fewer colon polyps and 50% fewer colon cancers.

They found that when pasta meals include legumes it leads to lower post-meal blood glucose levels than the pasta alone. This means that snacking on legumes can help you be more satisfied, and it appears to be true especially when you have them for a snack. In another study, researchers recruited just over 100 men and women and assigned to one of three test food groups: peanuts, snack mix, or a snack mix that included peanuts.

The participants ate a standard lunch, designed to provide 30% of their recommended daily caloric intake, in the test lab on four different occasions. On the first (control) occasion they did not receive any of the test foods, but on each visit following they received one of the test foods. Whether the test foods were given with the meal or two hours after the meal (as a snack) was determined randomly. As the participants kept food diaries on the days they ate in the lab, the researchers could determine if the number of calories in the test foods - and when they were eaten - were compensated for by eating less later in the day.

They found that although the participants tended to eat the same number of calories over the course of the day regardless of which test foods they ate or when, those who snacked on peanuts (as opposed to eating them with their lunch meal) compensated for those additional calories at later meals by eating less. Those who had snack mix or snack mix with peanuts ended up eating more calories.

For example, eating 300 calories worth of peanuts as an afternoon snack meant that the individual ate as much as 225 fewer calories at dinner - without feeling hungry.

The problem with many snacks is that the additional calories they contain are not compensated for by eating less at later meals. This doesn't seem to be the case with peanuts, making them a better choice for between-meal snacks: not only will they help improve your Mediterranean diet score, you are more likely to be satisfied with your snack, and to consume, overall, almost the same number of calories over the course of the day as you would have if you had not snacked at all. All while avoiding highly processed junk food.

This is one change that's really easy to make part of your life. Snacking on peanuts and having peanut butter sandwiches for lunch are easy ways to add more legumes to your diet. Chili in all its endless varieties, and soups like split pea, navy bean, and black bean are really easy to make. Keeping frozen peas on hand as well as cans of no salt added beans in the pantry means you'll always have enough to get more than four servings a week.