Why are vegetables good for you?

Vegetables in the Mediterranean Diet 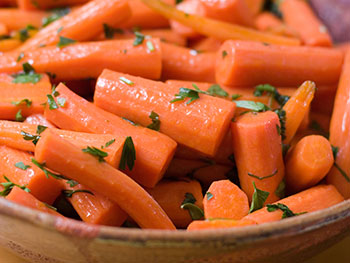 Of the nine principles of the Mediterranean diet, meeting this requirement and earning that one point in the Mediterranean Diet Score is the easiest to do because you have to eat so few vegetables to get that score. The best part is that it's the one thing you can't get too much of. (You'll never hear your doctor say, "Hmm, my lab tests show that you've been eating too many carrots.") Even better, there are many classic American recipes using vegetables, from Cole Slaw to Creamed Spinach.

Much of the research on vegetables in the diet is focused on the antioxidants abundant in everything from asparagus to zucchini. It is now clear that that the vitamin, mineral and antioxidant benefits from vegetables can't be gotten by taking a pill. (J Nutr http://www.nutritionj.com/content/6/1/10) (Am J Clin Nutr 2006;84(4):880-87)(JAMA 2009;301:52-62)(Cochrane D Sys Rev no. 2 art. no.:CD007176(2008)). Recent studies show no benefit from taking supplements, but getting the same vitamins from vegetables is pretty powerful: each additional serving of fruit and vegetables per day reduces your risk of heart disease by 4%. That's huge! But it's not just about heart disease. Putting more veggies on your plate has been shown to reduce the risk of multiple types of cancers. Add to this that research has also shown a clear weight loss benefit by eating more vegetables.

There are two ways to eat fewer calories. One is to eat smaller portions and the other to reduce the amount of calories in a particular dish. Dr. Gourmet recipes use both of these approaches, enhancing the taste and satisfaction of a recipe by choosing lower calorie ingredients that maximize flavor. "Calorie density" describes the number of calories contained in a given amount of food. For example, 4 cups of air-popped popcorn has less than 100 calories, while 4 cups of french fries from McDonald's would have over 2,700 calories. The french fries are more calorie-dense than the popcorn.

Reducing caloric density is a great strategy and it has been shown that people are just as satisfied with lower calorie recipes. For example, researchers at Johns Hopkins School of Public Health compared recipes made with ground beef with the same dishes made by replacing the meat with mushrooms.

They recruited 54 men and women of varying body mass index (normal, overweight or obese) to have lunch at the School of Public Health on eight occasions. At four of the lunches the subjects were served a meal of either lasagna, savory napoleon, sloppy joes, or chili that were all made with ground beef; on each of the other four occasions they were served the same meals, but with the same volume of mushrooms substituted for the ground beef. Each time the participants were asked to keep detailed records of what they ate later in the day, how hungry they felt, and how satisfied they felt with their lunch meals.

There were four possible variations on the meals:

All three of the lower calorie variations of the standard diet saw the participants eating less: for all of the non-standard meals, the subjects were presented with smaller portions or reduced-calorie versions of their meals, or a combination of the two (smaller portion, lower calorie). However, the subjects found the dishes to taste as good and be as satisfying as the traditional recipes.

The researchers told their subjects that they were comparing the "acceptability" of mushrooms versus ground beef in the diet. They found that although the subjects knew that they had been served mushrooms instead of beef, they still rated meat and mushroom meals about the same in terms of how they tasted, whether the meals satisfied their appetite for lunch, and how satisfied they felt later in the day. Over the four days that participants ate a mushroom meal, they consumed an average of almost 1,500 fewer calories than they did over the four ground beef days. Each mushroom meal averaged about 310 calories, while the ground beef meal averaged about 730 calories.

On each individual day, eating mushrooms in their lunch meant consuming an average of 420 fewer calories than they did on days that they ate ground beef in their meals. (Note that losing 1-2 pounds per week means eating about 350 fewer calories per day!)

This supports many earlier studies by demonstrating that even if people know that they're not eating the same version of the expected food, they'll still behave as if they did  — in terms of total calories eaten that day — if the food is the same volume and just as satisfying as the original. It is simple: getting more veggies in your diet means not only improving your Mediterranean diet score, it also means losing weight and still being really satisfied.

Maybe you're like my patients who say, "But I just don't like vegetables." They are quite sincere when they say this. When I ask if there are any veggies they will eat I always get a response. They will say, "Well, I do like butternut squash," or "Tomatoes and lettuce are fine." I keep asking and they keep coming up with ones that they will eat. I generally stop around 7 or 8 different veggies even though they said they wouldn't eat them because they "just don't like vegetables."

This is how you should get started. Make a list of what you do like. After you've done that, make a list of recipes you love. For instance, I will have patients say they don't like carrots, but when I ask about a particular recipe like Candied Carrots they will say, "I love those, but they're only for Thanksgiving." Of course there's no recipe that's just for a single day of the year, especially if it's veggies. Find the recipes you love, put the ingredients on your grocery list, and get what you need the next time you are at the grocery store.

Plan on an extra helping for dinner. Buy enough when you are at the grocery so that you can make extra. It's just as easy to make double the servings of Green Beans Almondine as it is to cook a single batch. It won't add many calories and they'll fill you up. You'll be healthier and there is excellent research to show that you'll be far more satisfied. Choosing recipes that contain a lot of vegetables helps add flavor and volume to your meals. It is no coincidence that what New Orleanians call "the holy trinity" of onions, celery, and peppers is based in Mediterranean cuisines. It not only adds a lot of flavor to recipes, it also makes them healthier.

Keep in mind that vegetables aren't just for dinner. You can pile as many veggies on your sandwich at lunch as you want: lettuce, tomatoes, cucumbers, green peppers, red peppers, onions, mushrooms, sprouts.... The list is endless and every day your sandwich will be an adventure.

Making vegetables part of your life as snacks is another great way to eat more. There's fantastic research that shows how satisfying this can be. Simple changes in just one of the foundation areas of a Mediterranean style diet can have a profound impact on your weight and long term health. Make the produce section at the grocery store your first stop.