Putting calories and sodium information on restaurant menus may backfire
For years chefs have resisted marking certain menu items as "healthy:" they know that it's the kiss of death. Nobody will order it. That may be changing, but the fact still remains that many people believe that healthy food just can't taste good.

When you don't know it's low sodium
Way back in 2011 I shared with you an article about reducing the amount of salt in bread. Breadstuffs are one of the largest sources of sodium in our diet, so a team in the Netherlands conducted what is essentially a blinded taste comparison of salt-reduced breads with standard breads.

The Measure of Taste
I measure everything. As many of you may have seen, when I am on television or in interviews I stress the importance of careful measurement as one key to cooking and eating healthy.

More vegetables, less meat: it can be done in restaurants 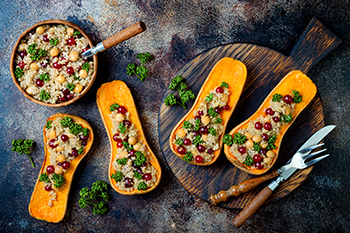 One of my goals with both Dr. Gourmet and Health meets Food: the Culinary Medicine Curriculum is to encourage people to get back into the kitchen and learn how to cook for themselves. I think you'll agree that it's an admirable goal, but it would be naive in the extreme to think that home cooking alone will reverse the rise in obesity and the attendant increase in chronic health issues. The fact is that people eat out - and in the United States, at least, they eat out a lot.

That means that chefs and restaurateurs could have significant influence on what people eat - if they chose to. Yet as a chef and former restaurateur myself, I understand the risks, and there are more than a few:

First, people think that healthy food can't taste good, so marketing a food or meal as healthier is the kiss of death - nobody will order it.

Second, it's easy to make foods taste better by adding fat in the form of butter or cream and salt (bacon is basically fat and salt put together) - and in a busy kitchen easy can make a big difference to the bottom line. It takes knowledge, time, and effort to make great vegetable-forward dishes that don't rely on fat and salt.

Third, the perception among chefs is that their clientele expect large portions - certainly of meat, but that extends to just about everything on their plate. That means a significant balancing act between the price of the ingredients on the plate and the clientele's expectations of both flavor and how much they wish to pay.

There's more, but those are three good reasons why I'm currently working on a Health meets Food curriculum for chefs and food service professionals: the evidence shows that contrary to chefs' and restaurateurs' concerns, many people will choose more plant-forward meals (by which I mean 'not necessarily meat-free') when given the opportunity and they will enjoy and value those meals as much as they do meals that include larger amounts of meat.

The first experiment was conducted in a privately owned French restaurant in the Netherlands, where the guests on one day were served the restaurant's usual portion sizes (the control day), then on a different day the guests were served meals prepared identically but with the meat or fish portion of each meal reduced by about 12% (on average) and the vegetable portion of each meal increased by about 31% (on average).

The amount participants actually consumed was measured by weighing the food left on their plates, and all participants were invited to respond to a questionnaire regarding their perception of the overall quality of their meal, its presentation, whether the amount of vegetables and meat were too much/not enough/just right, and how attractive they felt the dish was. The participants were not informed of the change in amounts of meats or vegetables.

The results? The participants felt that the amount of meat/fish or vegetables presented was "just right" regardless of whether they consumed the control (normal amount) meal or the reduced-meat, more-vegetable meal. In both cases the guests indicated they were "satisfied" or "very satisfied" with their meals in about equal amounts, although in the meals with more vegetables there tended to be more vegetables left on the plate as well as the guests rating the taste of the vegetables somewhat lower when there were more of them on the plate.

The second experiment involved sandwiches served in corporate cafes: the authors worked with the corporate chefs at 6 locations of the same company to serve their standard sandwiches on a control day. On a different day at these same locations the chefs worked with the authors of the study to create similar sandwiches with reduced amounts of meat and fish as well as increased amounts of vegetables. This was not done haphazardly, however: the reduced-meat sandwiches were thoughtfully designed to ensure "full flavor" and a tasty appearance, with smaller pieces of the meats distributed evenly across the sandwich to ensure full flavor in every bite.

Once again the guests indicated their acceptance of the dish by consuming 100% of the sandwich in nearly every case. They indicated similar levels of satisfaction with the meat/fish or vegetable flavor and increased satisfaction with the amount of vegetables with the increased-vegetable sandwiches. Finally, while 70% of the participants in the control, or non-manipulated sandwich period indicated that they would buy the sandwich again, fully 75% of those eating the sandwiches with more vegetables and less meat/fish said they would order their sandwich again.

The third experiment was carried out in a self-service restaurant at a train station. The authors compared first meals containing the standard serving amounts of meat/fish and vegetables with meals on a different day containing reduced amounts of meat/fish and more vegetables, then on a third day the guests of the restaurant were allowed to choose: did they want "the dish with extra vegetables and a bit less meat or a dish with the regular portion sizes"?

Finally the authors tested their ideas at a buffet, all-you-can-eat restaurant. On each of 6 days the authors weighed and measured everything set out on the buffet and when possible weighed and measured the guests' leftovers. For three of the days the restaurant set out their usual dishes that included 2 salads and 4 hot dishes, all of which contained meat. On the 3 intervention days, none of the salads contained meat and 3 of the hot meat-containing dishes were replaced with all-vegetarian dishes, while the last meat-containing dish had half of its meat content replaced with vegetables.

During the intervention period the guests consumed over twice as much vegetables, although they also wasted twice as much as usual - with "waste" measured as everything both left on the buffet at the end of the night as well as that taken onto peoples' plates but not consumed. That said, they consumed 4% less meat overall during the low-meat days, while the amount of meat wasted remained about the same. In both cases the percentage of guests who rated themselves as "satisfied" or "very satisfied" with their meals was about the same regardless of whether they were presented with high-vegetable meals or not.

The key here is that none of these restaurant guests were informed that they were receiving anything but the restaurant's standard meal - except when they were specifically asked to choose whether they wanted less meat and more veg in their meal.

Experiments 1 and 2 suggest that it's important for chefs and foodservice to be thoughtful in their cooking and presentation of plant-forward dishes, which isn't news to me or to those creating recipes for Health meets Food: you can't treat vegetables as an afterthought - whether they are a significant portion of a dish or "just" a side dish - and expect people to be satisfied with their meal.

Experiment #3 shows that people are more willing to accept more plant-based foods in their meals than those in chefs and foodservice currently expect: fully 1 in 3 guests voluntarily chose a smaller portion of meat when it was offset by more vegetables.

Even the buffet experiment, #4, is encouraging for those hoping to foster a more plant-based diet across the board: while it's clear that those who wanted to eat meat found it - note that on average the guests consumed about the same amount of meat whether there were multiple meat-containing dishes on the buffet or not - they also consumed over twice as much vegetables even though more vegetables were wasted. My thought is that improving the vegetable dishes presented might help avoid that waste, although in a buffet setting people might be more inclined to initially serve themselves more of foods they are unfamiliar with, thus leading perhaps to more waste when the food item isn't as tasty as the guest expects.

As a consumer at a restaurant, this research says that chances are you'll be satisfied with a smaller portion of meat on your plate than you might think. Many restaurants serve portions of animal protein - beef, lamb, fish, or poultry - that are two or more times the appropriate size. Become familiar with what appropriate portion sizes of meats look like, then when you go out to eat, put the meat you don't need in a take-home box right away. If you're still hungry, consider ordering an extra vegetable side - one that's not drenched in butter or salad dressing. (Often the chef will be happy to simply saute your vegetables in a little olive oil if you just ask.) You'll be just as satisfied with your meal - and you'll have something to put on your sandwich at lunch the next day.