You CAN get used to less salt!
I've talked before about research that shows that those who gradually reduced the sodium level in their overall diet found that the same crackers tasted saltier after they'd become accustomed to a lower daily salt intake. Researchers in The Netherlands just published an interesting study in which they looked at people's responses to reduced sodium levels in bread.

Are we ready to cut salt?
If you're reading this, you're probably well aware that the average American eats far more salt than is good for them, with estimates of the average sodium intake ranging from 3,400 milligrams to over 10,000 milligrams per day. The vast majority of the salt in foods comes not from the individual diner adding it at the table, but rather it is added during cooking (or processing).

When you don't know it's low sodium 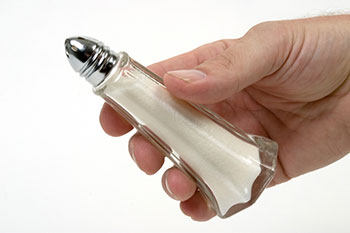 Way back in 2011 I shared with you an article about reducing the amount of salt in bread. Breadstuffs are one of the largest sources of sodium in our diet, so a team in the Netherlands conducted what is essentially a blinded taste comparison of salt-reduced breads with standard breads. They found that those who ate breads with progressively lower amounts of sodium over several weeks did not really notice that their bread was less salty, suggesting that people could fairly easily become accustomed to less sodium in their food.

Members of that same team of researchers from The Netherlands performed a study recently that expands on their previous research (J Acad Nutr Diet 2015;115:1614-1625). They recruited 74 adult men and women of clinically normal weight to eat their daily lunches from a buffet at the university's on-campus restaurant nearly every day for 5 weeks. For the first two weeks the participants ate the same typical Dutch lunch foods, which included breads; sandwich meats and other savory fillings; sweet sandwich spreads or fillings; various types of cheeses; light soups; and green salads with salad dressing.

For the third through the fifth weeks of the study, half the participants chose the elements of their meals from the same, non-sodium-reduced, offerings, while the other half chose from what appeared to be identical items that had in fact had their sodium reduced by between 29% and 61%.

Throughout the five weeks of the study the authors photographed and weighed the foods the participants consumed in order to estimate both caloric intake as well as sodium intake. In addition, at the end of weeks 2 and 5 the researchers collected 24-hour urine samples from all participants to measure the total amount of sodium each participant consumed over the course of that entire day (not just at lunch).

They discovered that those who ate from the reduced-sodium buffet consumed about the same number of calories, but about 1,000 milligrams less sodium at lunch than their fellows who chose from the non-sodium-reduced buffet. Further, those eating the reduced-sodium foods did not make up for the less-salty lunch foods by eating more salt at other times of the day, as evidenced by the amount of salt in their urine samples. Even more interesting is that when the authors asked the participants to evaluate the flavors and saltiness of the foods they had eaten over the previous weeks, both groups - the reduced-sodium group as well as the regular-sodium group - rated their meals about the same.

I have said for years that chefs could easily cut the sodium in the foods they serve by simply doing it - and not telling their patrons. This study supports that assertion. Here are three steps you can take to cut the amount of salt in your diet at home. At restaurants, ask the chef to minimize added salt in your dish. You're unlikely to notice the difference.