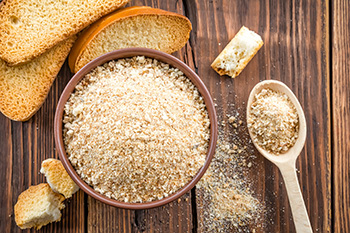 As you may know, Celiac disease is often called an allergy to wheat. In fact, it's not a true allergy at all - it's an autoimmune condition in which consuming a protein in wheat gluten causes the body to attack the villi in the small intestine.

These villi are critical to absorbing nutrients, so those with Celiac will sometimes have anemia and other signs of malnutrition - this in addition to the more common stomach problems such as diarrhea, nausea, and bloating.

The only treatment for Celiac disease is a gluten-free diet. Those with Celiac must be vigilant about the food they eat because wheat (as well as rye and barley) is so often a hidden ingredient in foods: for example, it might be obvious when a food is breaded that it contains wheat (and thus wheat gluten), but when wheat flour is used to thicken a sauce, it's not as obvious.

Many people with Celiac thus avoid eating at restaurants altogether, although there are more and more restaurants offering gluten-free options. Even then there's some risk of what is known as cross-contamination. Most simply: imagine dipping a utensil into flour and then dipping that utensil into something else without wiping it off, first. Clearly some wheat will get into whatever you dip that used utensil into, correct?

The idea of cross-contamination doesn't just apply to such obvious examples, however. Currently the recommendation is that those with Celiac use their own specific utensils for cooking that are never used for cooking items that contain gluten. Similarly, those with Celiac should avoid using toasters that have been used to toast items containing wheat gluten.

But this accepted wisdom has never actually been tested. Recently a team of researchers with the Celiac Disease Program at Children's National Health System in Washington, DC teamed up with the Harvard Celiac Disease Program at Boston Children's Hospital to determine just how much cross contamination occurs in common cross-contamination scenarios, with their research being published in the journal Gastroenterology (2020;158:273-275).

Next, they rinsed out the pan used to cook the pasta with water and cooked a new batch of gluten-free pasta in fresh water, testing the pasta for the presence of gluten after cooking.

Finally, they washed the pan with soap and water and cooked another batch of gluten-free pasta in fresh water, then tested that batch of pasta for the presence of wheat gluten.

Toaster
The authors used two rolling toasters and three pop-up toasters in their hospital cafeterias that were used to toast wheat-containing bread. They toasted multiple pieces of gluten-free bread in each toaster and tested the toasted gluten-free bread for the presence of wheat gluten.

Slicing
The authors sliced frosted, wheat-containing cupcakes just one time with a knife, then used the same knife, without wiping it off, to slice a gluten-free cupcake one time. The gluten-free cupcakes were then tested for the presence of gluten. Similar to the test with the pasta, the authors also performed single slices to fresh gluten-containing cupcakes with the same knife that was rinsed with water, then another set of cupcakes were sliced with the knife after the knife was washed with soap and water.

The gluten-free cupcakes that were sliced with a knife previously used to slice a cupcake containing gluten contained gluten in amounts of at least 20ppm only 2 of the 28 cupcakes tested. All but 2 cupcakes tested at levels under 5ppm. Similarly, any of the methods used to wash the knives effectively removed all detectable gluten.

Finally, and what's most interesting to me since I travel so frequently: only 3 of the 20 slices of gluten-free bread that were toasted in the toasters tested positive for wheat gluten. Those levels were all under 8.1ppm - even though the researchers could clearly see previously toasted breadcrumbs in the machines as they were used to toast the gluten-free bread.

It's always better to have solid evidence: sometimes received wisdom makes a lot of sense on the face of it, but that doesn't mean it's true. While I will still recommend to my Celiac patients that they wash their pans and utensils between using them to cook foods containing wheat gluten and cooking gluten-free meals, I think having entirely separate, dedicated gluten-free kitchenware might be unnecessary.

Each person with Celiac will have to make this decision for themselves in conjunction with their physician. Some might not want to risk it and some might be comfortable with the idea. I will say, for myself, that I'm glad to not have to worry about toasting my gluten-free bread in the toaster oven at hotels.