Fight hunger - with chewing gum
About ten years ago I reported on a pair of research articles looking at the effect of gum chewing on appetite and snacking: could chewing gum be an effective weight loss tool?

Does Drinking Water Help You Lose Weight?
Patients have been asking me for years if drinking water would help them lose weight. While I certainly recommend that people switch from sodas (diet or regular) to drinking water, coffee, or tea, there hasn't been a whole lot of evidence for a link between drinking water and weight loss alone.

Low-carb vs. high-carb: who's less hungry? 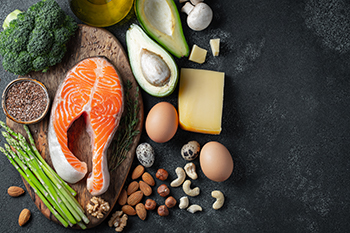 The fad diet wars continue, with more and more variations of a low carbohydrate diet being invented every few months, it seems. There's Atkins, South Beach, keto, paleo, and a host of other diets that essentially direct you to stop eating grains in favor of protein (in the form of meats, most often) and fat.

In terms of weight loss, it does appear that for the short term a low-carbohydrate diet may help you lose weight faster than a more moderate or high-carb diet. The problem, however, is maintaining that weight loss. Losing weight is great, but if you can't keep it off, what good does it really do you? That's even more important if you have been diagnosed with diabetes.

Researchers based primarily in Australia (J Nutr 2020;00:1-6) randomly assigned 84 clinically overweight or obese persons who had previously been diagnosed with type 2 diabetes to one of two different diets.

The participants followed their assigned diets for two years, while the researchers monitored not only their weight but also their appetite. Using a visual scale of 1 to 100 (least to most), for a 7-day period at weeks 0, 4, and 16, the authors asked the participants to rate their feelings of hunger, fullness, desire to eat, and how much they felt they could eat (prospective consumption) at regular intervals before and after each meal of their day.

Somewhat unsurprisingly (to me, anyway), the two groups lost about the same amount of weight over the two years of the study: It didn't seem to matter which diet the participants followed.

While they lost the same amount of weight (statistically speaking), the participants didn't experience the reduction in overall calories in quite the same way: those following the High Carbohydrate diet reported feeling "greater 'daily overall'" fullness (that is, "How full do you feel right now?") than those on the Very Low Carbohydrate Diet as well as feeling greater "reduced prospective consumption," which could be described as "How much could you eat right now?"

On the one hand, this research suggests that if you are looking to lose weight, your overall caloric intake is more important than what you eat in terms of macronutrients like protein, fat, or carbohydrate.

That said, it does appear that a high-carb diet, one with plenty of quality carbohydrates like whole grain breads and pastas as well as legumes, fruits, and vegetables, will help you stick to your diet better because you're more satisfied over the long haul.