Make Your Diet More Effective with A Little Something Before Meals
There are all sorts of appetite reduction tips that I hear from my patients. Some swear by chewing gum to reduce their appetite, although at least one study indicates that it doesn't actually affect appetite.

Being Careful with Alcohol
Last week's column about being prepared for the cocktail or holiday party resulted in a lot of questions about alcohol and drinking. While we know that drinking can be beneficial, it can also cause many health issues. About 2 drinks a day on average for men and 1 per day for women has been shown to be favorable, but binge drinking can cause more health problems than balanced consumption.

Dieting? Spicy Foods May Help
People ask me this all the time: "Is it true that eating spicy foods raises your metabolism?" 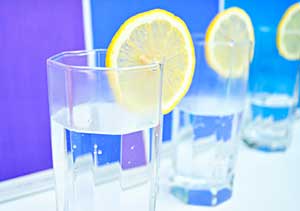 Patients have been asking me for years if drinking water would help them lose weight. While I certainly recommend that people switch from sodas (diet or regular) to drinking water, coffee, or tea, there hasn't been a whole lot of evidence for a link between drinking water and weight loss alone.

What evidence we do have suggests that drinking a glass of water before meals is likely to lead you to eat less. The problem is that the studies are of fairly short duration and include a small number of people. One study involved less than 50 people following a reduced-calorie diet for 12 weeks. Those who drank two cups of water (that's 16 ounces) before meals lost more weight than those who did not drink the water. A similar study of 64 people found that those who had a little something before their meal, either a glass of water, a glass of grapefruit juice, or an equivalent amount of actual grapefruit, lost weight more quickly than those who did not have that "preload" - even though they were consuming the same number of calories regardless of water, juice, or fruit intake.

Fortunately a team in Germany just published a review study in the American Journal of Clinical Nutrition (2013;98(2):282-99) that seeks to add power to the studies we do have. (Recall that these systematic reviews collect many smaller studies into one larger study.) After analyzing the methods and results in 11 original studies and 2 other systematic reviews, their pool of participants included over 20,000 people. The results, however, were mixed.

Three of the studies included in the review suggested that drinking water would help reduce body weight in those who were either actively trying to lose weight or maintain weight already lost. Other studies yielded contradicting results, especially those studies that included people who were of normal weight and those who were overweight.

Almost all of the studies included in the review were not of the best quality: six of the studies were cross-sectional, meaning they were a snapshot in time as opposed to following people over time. Even worse, some of the studies were funded by beverage companies, who would have a vested interest in selling bottled water.

What this really means is that more studies need to be done, but doing those kind of long-term interventional studies is tough and expensive. Try getting a few hundred of your friends to go on a diet with you for a few months and you get the idea of how difficult these studies are to perform. Until then we'll work with what studies we have, the best of which indicate that drinking water, especially before meals, can help you lose weight in combination with controlling calories.