Visualize the Sugar
A group of researchers at the University of Alabama theorized that showing people concrete representations of the amount of sugar in a drink might deter people from drinking it - and devised a series of four interconnected studies to find out if that might not be the case.

What The American Beverage Association wants you to thinks
Researchers at the University of Colorado and Temple University teamed up to compare drinking water with drinking beverages sweetened with non-nutritive sweeteners (meaning products like aspartame, stevia, or Splenda®) as part of a weight-loss study. Their stated hypothesis was that people would lose the same amount of weight regardless of whether they drank water or a diet drink.

Beverages vs. food: the source of sugar matters 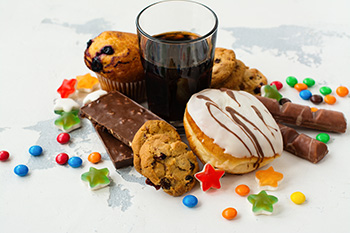 We know that sugar-sweetened beverages contribute to higher blood pressures, poor cholesterol scores, and chronic diseases such as diabetes and gout, and you probably are well aware of various public health initiatives aimed at getting people to reduce their consumption, from taxing the beverages themselves to limiting the size of the beverage you can purchase. From a focus on sugary beverages, however, the scope has widened to include all sugar - especially added sugars - as a health risk. While we know quite a bit about the impact of those sweetened beverages, what about the sugars in foods? Are they as much of a risk as the sugars in liquids?

A team of research at Cambridge in the UK used data gathered for The Fenland Study, an observational study of people living in and around Cambridgeshire in the East of England (Clin Nutr 2018;37:1313-1322). Over 12,000 men and women who were born between 1950 and 1975 were recruited between 2005 and 2015. At the start of the study the participants reported on their usual diet over the previous year by responding to a 130-item dietary questionnaire. Their Body Mass Index was calculated from their lab-measured height and weight, their blood pressures were taken, and blood was drawn for testing. The participants even went through a fasting oral glucose tolerance test.

The authors used the participants' blood test results, BMI, blood pressures, and glucose tolerance test results to derive what is known as a metabolic risk z-score. This tool, created by the World Health Organization, pools the results of several test to create a composite score that indicates the individual's overall risk of heart disease, diabetes, and other diet-related illnesses. The research team also evaluated HbA1c scores (a measure of diabetic control), C-reactive protein (CRP) levels (a measure of overall inflammation), and levels of insulin resistance.

From the participants' dietary questionnaires the authors could analyze the source and amount of the sugars in the participants' usual diets. For this study the authors separated sugars into sugars from liquids, sugars from solids, free sugars, and non-free sugars. Sugars from liquids included sugars from beverages like tea and coffee as well as hot chocolate, alcoholic beverages, sodas, and fruit juice, but not milk, as the questionnaire did not differentiate between milk as a beverage itself or used in food (such as poured over cereal). Sugars from foods included all foods as well as semi-solid foods like yogurt and soup. Sugars that were added to coffee or tea were counted as sugars from solids.

"Free sugars" included sugar from fruit juice, table sugar, honey, and other sweet syrups, all sugars in processed foods that don't ordinarily contain sugar (what we are used to calling "added sugars"), and 50% of the sugars in foods that contain added sugar but also contain sugars in the underlying ingredients (such as breakfast cereals or baked beans). "Non-free sugars" are all other sugars that are naturally intrinsic to the food: the sugars in a piece of fruit, for example.

After correlating sugar intake by type with individuals' metabolic z-scores and other measures of metabolic health, the authors found that those who consumed the most calories from sugar in the form of beverages (the top 20% of consumption) had poorer metabolic z-scores, poorer C-reactive protein scores, and poorer insulin resistance than those whose consumption was in the bottom 20% of intake. Sugar intake from solid foods and non-free sugars, on the other hand, were not related to individuals' metabolic scores either way, even at the highest levels of intake.

On the one hand, this is an observational study - a snapshot in time. It can't show us that the sugars in beverages were the cause of the poorer metabolic scores. Indeed, those who consumed the most sugars from liquids also consumed more total calories and less vegetables and overall fiber than those who consumed the fewest of their calories from sugary liquids. Even so, this is another reason for you to ditch the sugary beverages in favor of coffee or tea - even if you put sugar in either drink - or water. You should also watch those foods with a lot of added sugars, like baked goods, cereals, or fruits canned in syrup. Look for the least added sugars.