Improve glucose control with brown rice
A randomized, controlled trial conducted in India, which has the second greatest number of people living with Type 2 diabetes in the world, suggests that choosing brown rice instead of white rice may help those with metabolic syndrome improve their glucose control.

Food plus medication equals....
As a physician, caring for people with diabetes is much more than simply helping them manage their blood sugars. Among other things, those with diabetes are at higher risk of poor cholesterol scores, which can lead to greater risk of heart attack and stroke.

Low Glycemic Index vs. High Fiber Diet: Which is Better for Diabetics?
There's been a lot of talk about low-glycemic-index diets being better for helping diabetics control their blood sugars, but the studies that have been done tend to be small and of short duration. Back in 2008 researchers in Canada decided to improve on past studies by designing a larger, more long term study to compare the effects of a low glycemic index diet with a high cereal fiber diet.

How to "cure" diabetes 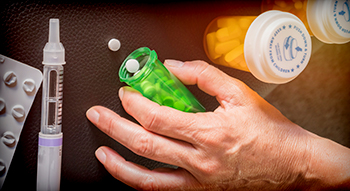 "Eat this one food to cure diabetes!"

I get a fair amount of spam emails, and kooky cures for diabetes seem to be popular ways to part people from their money, along with cures for hair loss and erectile dysfunction.

Unfortunately, there's really no cure for diabetes, although it can go into remission, which is defined as a diabetic maintaining healthy blood sugar levels without the need for medication.

Past studies have shown that diabetics can put their disease into remission by losing weight, but those studies might be seen as flawed: that weight loss is usually achieved within a few months, with some extreme techniques, like extremely-low-calorie diets; the number of people included in the study are comparatively few; and the study also includes frequent, intensive contact with dietitians and other health professionals.

A team of researchers in England partnered with 49 general care practices in the East of England (Diabet Med 2019;00:1-8), recruiting 730 men and women who had not previously been diagnosed with diabetes, but were identified as diabetic through the study's initial screening tool. The authors randomly assigned each general care practice - thus several of the participants - to an intervention program or to continue with the usual standard of care for the next five years.

The intervention program was carried out through the general care practice over a five-year period, which included additional education materials regarding diet and exercise, 3 ten-minute consultations with a doctor and 3 with a nurse over and above the regular visits for a person the patient's age, and a recommendation to the general practitioner that they refer the intervention patients to a dietitian.

After five years, the authors reviewed the status of the participants: how many of them had been prescribed medication to control their diabetes?

Compared to those participants who maintained their weight, those who lost at least 10% of their body weight in the first year after diagnosis were almost twice as likely (177%) to be in remission (that is, with a HbA1c less than 6.5%). More importantly, from my point of view, is that those who lost weight more slowly, reaching that 10% loss of body weight in the following 2-5 years, were over 2.5 times more likely to be in remission compared to those who maintained their initial body weight.

Ten percent of one's body weight isn't all that much: someone who weighs 200 pounds would only have to lose 20 pounds to significantly increase their risk of having to go on medication for their diabetes.

What's even more exciting is that those who lost between 5 and 10% of their body weight in the first year after diagnosis (that's between 10 and 15 pounds for a person weighing 200 pounds) were also far less likely to need medication after five years: compared to those who maintained their weight, they were still 24% more likely to avoid needing medication.

The big take-home messages here are that even small differences can have a big impact on future health: a reduction of just 5% of total body weight significantly increases a person's chances of remaining off medication. Second, the participants in this study continued to choose what to eat, when, and how much, while seeing a physician or other health professional only a few times more per year. Intensive diet management simply wasn't necessary, suggesting that a more holistic approach at the primary care level would be just as effective in preventing diabetic disease progression as the more resource-intensive interventions used in other studies.

In short: with the right training, your primary care physician can help you avoid going on medication for your diabetes. The Culinary Medicine Specialist Board offers a certificate program to become a Certified Culinary Medicine Specialist, and there are Continuing Medical Education classes available that will train your physician to offer food- and lifestyle-based guidance that you can use in your everyday life. Share this article with them!