Whole Grains and Prediabetes
One of the first clinical signs of developing diabetes is what is known as "impaired glucose tolerance." Simply put: after a standard blood glucose test, those who have a blood glucose level that is higher than normal, but lower than that of a person with diabetes, are considered to have impaired glucose tolerance. This often appears in combination with insulin resistance, in which the cells do not respond to the release of insulin.

Eggs OK for Diabetics, Too
Every now and then I still get an Ask Dr. Gourmet question about the cholesterol in a recipe, but the good news is that the word does seem to be getting out that eggs are good for you. That said, there's been lingering concern about eggs increasing the risk of heart disease or stroke in diabetics (JAMA 1999;281(15):1387-1394), so those with diabetes or pre-diabetes are often told to limit their egg consumption. 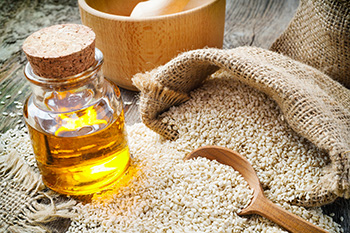 As a physician, caring for people with diabetes is much more than simply helping them manage their blood sugars. Among other things, those with diabetes are at higher risk of poor cholesterol scores, which can lead to greater risk of heart attack and stroke.

We know that olive oil is an excellent source of the monounsaturated fats that are so important in maintaining good cholesterol scores, but obviously olive oil is not the only source of these healthy fats. There's research to suggest that sesame oil and rice bran oil also have positive effects on cholesterol scores as well as HbA1c scores (a measure of diabetic control).

A team in India recruited 300 adults averaging 50 years of age who had been recently diagnosed with Type 2 diabetes (AJM 2016;129(7):731-739). None was using oral diabetes medication or had evidence of heart or liver damage. An additional 100 adults without diabetes (average age: 32) were also recruited to participate.

The 300 diabetics were randomly assigned to one of three groups:
Group 1 received a daily cooking oil stipend of 35-40 milliliters (about 7-8 teaspoons) of an oil blend of 20% unrefined sesame oil and 80% refined rice bran oil and were instructed to use no other oils for cooking.
Group 2 received a daily oral dose of glyburide (an oral diabetes medication).
Group 3 received both the cooking oil stipend and the daily dose of glyburide.

The study lasted for a total of 8 weeks. At the start and conclusion of the study all of the participants' blood glucose, HbA1c, and cholesterol scores were recorded, with an additional assessment of their glucose scores midway through the study.

Those taking only the oral diabetic medication had similar improvements in their HbA1c and better glucose scores. Their cholesterol scores, however, changed hardly at all, except their triglycerides and LDL cholesterol, which actually increased slightly.

Those who took both the oral medication and used the oil blend, however, found that using both meant their glucose scores and HbA1c scores improved significantly more than either those taking the medication alone or those only using the oil. Further, they reaped about the same benefits to their cholesterol scores as did those using the oil blend alone.

This is just the type of thing I like to talk about when I discuss the idea of culinary medicine. I often see that the combination of medication and improvements in diet is synergistic, with the two treatments yielding greater results together than they do individually. (I like to describe this as 2 + 2 not equalling 4 but 4.6). A few cautions, however, for those diabetics who are getting ready to start searching for unrefined sesame oil and rice bran oil: first, these oils have strong flavors and a little may take over your dish. Second, bear in mind that the participants were not instructed to use all of their allotment of oil each day. 7-8 teaspoons of almost any oil will contain about 450 calories, which you may not need. Finally, discuss these results with your physician: we know that following a Mediterranean-style diet, which emphasizes olive oil and other monounsaturated fats for cooking, is a fantastic diet for diabetics, and it doesn't require specialized ingredients like unrefined sesame oil and rice bran oil.