Keeping It Off
We all know that it's one thing to lose weight - and quite another to keep it off for the long term. A study funded by the National Institute of Health and published recently in JAMA (2008;299(10):1139-1148) compares two strategies people might use to help maintain their weight loss: regular personal contact with a counselor via telephone or unlimited access to an interactive weight maintenance website. Could an online program take the place of an actual human being for the purpose of helping people maintain their weight loss?

When should you exercise? 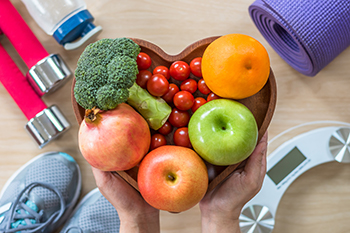 Recent research shows that of those who maintained a significant weight loss for 7 years or more, the majority exercised at least 4 times per week and tended to exercise at about the same time every day.

In a study published in the journal Obesity (https://doi.org/10.1002/oby.22535), researchers made use of information gathered by the National Weight Control Registry, an ongoing study examining those who lose at least 30 pounds and successfully maintain that weight loss for at least 1 year. Those who are admitted to the Registry are surveyed each year regarding the strategies they use to maintain their weight loss.

Although questions about the type and amount of exercise (defined as "time [set aside] to be physically active for the purpose of improving health") were already on the yearly survey, the question of when people exercised wasn't added to the survey until 2018. The participants were asked not only to specify which days per week they exercised, but also to specify what time of day they started their exercise sessions: early morning (between 4am and 9am), late morning (9am to noon), afternoon (noon to 5pm) or evening (5pm to 4am).

Only those participants who had responded to a survey featuring those questions were included in today's study, with the authors excluding those who did not exercise at least twice per week. This left 375 men and women in the study.

The authors defined "consistent exercisers" as those whose periods of exercise each week began in the same time frame at least 50% of the time.

Somewhat unsurprisingly, the authors found that 68% of the successful weight maintainers were those who consistently exercised at the same time each day. They also exercised longer in terms of total minutes per week, with the consistent exercisers averaging 285 minutes of moderate-to-vigorous exercise per week compared to 250 minutes per week for those whose exercise times varied.

It's interesting to note that those who responded to the physical activity questions but exercised less than 2 times per week had a higher Body Mass Index, on average, than those who did exercise at least twice per week.

The authors suggest in their discussion of the study that exercising in the early morning may be more effective in terms of creating a consistent habit of exercise, and you may see this study mentioned in the news with a somewhat-misleading headline to the effect of "Early morning exercise best for weight loss."

The truth is that the participants in this study represent a very small portion of those who had successfully lost significant weight and kept it off for at least a year. Further, participation in the Registry is purely voluntary, so there may be a certain amount of selection bias: participants may be more motivated to maintain their weight loss, for example.

We know from other analyses of these successful weight-loss maintainers that they have other strategies they also use to maintain their weight, including weighing themselves daily, keeping a close eye on portion sizes, and not drinking sugared soft drinks.

The take-home message here is that weight loss and maintenance is about lifestyle change. We know that going on a calorie-cutting diet for a short period and then returning to your previous eating habits is a recipe for not only losing weight but also regaining that weight fairly quickly (and often more than you lost).

While it's true that exercise alone, without a change in eating habits, is unlikely to lead to weight loss, it has many benefits completely aside from weight loss, and I encourage all of my patients to find some type of exercise that they can safely perform regularly.

For long term health, choose a balanced style of eating you can live with for the rest of your life, exercise regularly (at least 150 minutes of moderate-to-vigorous intensity exercise per week), and make both of those strategies a habit.