Mediterranean Diet Helps Prevent Central Fat Distribution
In last week's Dr. Tim Says.... column I wrote about the effects of a Mediterranean-style diet on central adiposity - otherwise known as "belly fat." I recently ran across a study conducted in Spain that compares three different diets head-to-head on their effects on the distribution of belly fat, so I thought I'd share it with you.

Watch your waist, redux
For years physicians and researchers have used Body Mass Index as a simple and cheap measure to help estimate an individual's risk of such chronic diseases as diabetes, high blood pressure, and heart disease. It's not perfect, however, as you probably know: those who are extremely fit and have very low body fat can still be classified as overweight or obese when you simply look at the interaction of weight and height. 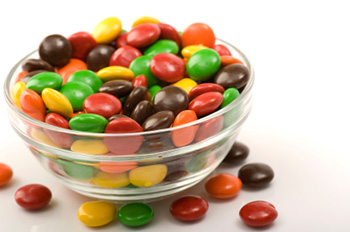 Abdominal obesity - that is, being apple-shaped instead of pear-shaped or carrying your weight around your middle instead of in your buttocks and thighs - is one of the criteria for metabolic syndrome, a precursor to diabetes and in and of itself a risk factor for cardiovascular disease.

Research has recently focused on these different types of obesity, and it appears that visceral fat - the fat deposited around the internal organs - is more of a health risk than the fat deposited just below the skin. Fatty deposits in the liver itself, a specific type of visceral fat, seems to be particularly related to a higher risk of type 2 diabetes and heart disease.

If it's true that being overweight or obese is less of a health risk if your levels of visceral fat are lower, as those findings imply, then are there foods or dietary patterns that contribute to the deposition of fat around the internal organs?

Using data gathered in the Netherlands Epidemiology of Obesity study, a research team in the Netherlands performed a cross-sectional study assessing the possibility of a link between levels of visceral fat and fat in the liver and diet (J Nutr https://doi.org/10.1093/jn/nxy260).

The study as designed included a total of over 6,600 men and women between the ages of 45 and 65. All of the participants filled out a dietary questionnaire and responded to demographic and health surveys, then a random sampling of just over 1/3 of the participants were selected to undergo an MRI to measure abdominal fat as well as liver fat content.

For this study, the authors included only those with good quality MRI results who had not been diagnosed with diabetes. Those with improbably high or low caloric intake and those who drank more than 4 alcoholic drinks per day were also excluded, leaving the authors with just over 2,300 people with complete dietary, demographic, and health surveys as well as high quality measurements of visceral and liver fat.

For their analysis, the researchers grouped the participant's food intake into nine groups: dairy (including milk, cheese, yogurt, and butter), meat, fruits and vegetables, sweet snacks (including chocolate, cakes/pies, and candy of any kind), fish, and plant-based fats and oils (including margarine and cooking oils like olive oil or canola oil). They then correlated the levels of intake per 100 grams of each food group with the amount of visceral and liver fat in each participant.

After taking into account gender, age, smoking status, education, ethnicity, level of physical activity, whether the female participants were pre- or post-menopausal, and the individual's total body fat, the authors found that those who consumed the most fruits and vegetables had moderately less visceral fat, and those who consumed the most plant-based fats and oils had significantly less visceral fat than those whose consumption of fruits and vegetables or plant-based fats and oils were lower.

Perhaps more concerning, those who consumed the highest levels of sweet snacks had almost 20% more fat in their liver than those who ate the least, while other food groups like dairy, fruits and vegetables, fish, meats, and fats and oils had no significant effect.

This is a cross-sectional study, meaning that while we see a positive relationship between those who ate lots of sweets and those with more fat in their liver, this does not prove that one caused the other. The authors did take into account several confounding factors, which strengthens their results. If you're a sweet snacker who likes candy or pastries, you'd be best off switching to fruit for your snacks. A savory snacker, who likes chips and pretzels? Try nuts instead.