Seeing Red: Cranberries are great for you!
It's not hard to see red during the holidays because cranberries are everywhere at Thanksgiving and Christmas. But they aren't just for the holidays and offer a lot more than just their festive appearance next to the turkey.

Berries for Your Heart
I've written before about the heart-healthy effects of polyphenols, the flavonoids found in large quantities in cocoa (Bite, 04/10/07), tea (09/15/06), and wine (11/21/07). Researchers in Finland noted that berries, such as strawberries, also are high in polyphenols. 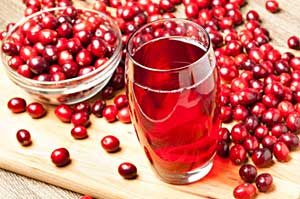 Judging from the women I see in my practice (admittedly not a very scientific sample, I know), there's a nearly 100% chance that if you are a woman who has ever had a urinary tract infection, somebody has told you to drink cranberry juice to help prevent (or treat) them.

Like a lot of these kinds of home remedies, it does seem to work for some people, and so people take this to mean that it's been "proven" to work. Well, unfortunately that isn't the case - there's a huge difference between one person's personal story and the scientific evidence supplied by controlled trials of large groups of people.

The good news is that there have been studies done on the effects of cranberry products on urinary tract infections (UTIs). A brief article in JAMA (2013;310(13):1395-1396) undertook a review of the existing studies to assess the state of the evidence for or against.

Among 13 studies including 2,380 participants, 12 were not suited for use in a meta-analysis (in which smaller studies are grouped together to form one larger study). Participants included not only women with recurrent UTIs, but also elderly persons, persons with bladder problems or spinal injuries, pregnant women, children with recurrent UTIs, and people with cancer.

The reviewers noted several problems with the studies:

Clearly larger, well-controlled studies are needed, but at this point we have to say that the jury is still out.

The authors remarked that "overall, cranberry products appeared safe" with gastrointestinal problems reported no more often in those taking the cranberry products than those taking a placebo. If you still want to drink cranberry juice for your UTIs, the reviewers further noted that the active ingredient in cranberries is only effective for 10-12 hours, so in theory one would have to consume at least 224 grams of pure cranberry juice (about 8 ounces) twice per day on a regular basis to see any benefit. If you're working on your weight, you'll want to keep in mind that juices do contain calories.