Don't be misled by association
Sugar is a hot topic right now: it's the ingredient people love to hate. Concern about added sugars in foods is so great that the federal government is considering putting "added sugars" on its redesigned nutrition label, and that concern is so pervasive that I've received questions about the source of sugars in some of my recipes that contain no sugar-type ingredients such as honey, brown sugar, white sugar, or maple syrup.

Sodium and Food Labels
The government created rules back in the 1980s for nutrition information labeling on packaged foods. Before the regulations were passed the only information required was a listing of the ingredients in the package. Other than that we were pretty much on our own and had to guess what might or might not be in any particular food.

Sodium Claims on Food Labels
Since you're a Dr. Gourmet reader, you're probably well aware of the relationship between high sodium intake and the increased risk of high blood pressure and heart disease. Because processed foods are the largest source of sodium in a Western diet, many countries allow specific health claims related to sodium to be listed on a food's label in addition to the sodium information listed in the Nutrition Facts.

The paradox of front-of-package labeling 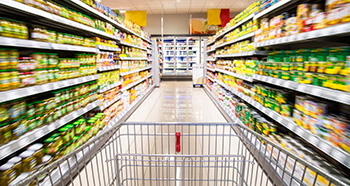 Here in the United States the Food and Drug Administration (FDA) has regulations for the types of claims that can appear on packaged foods. These are known in the industry as "front of package" (FOP) claims and come in two general types: nutrient content claims ("high in fiber!") and disease-risk reduction claims ("a diet high in fiber may help improve cholesterol scores"). (Here's an article I wrote on 10 things you need to know about health claims on food labels.) While other terms are also regulated, such as "cholesterol-free" or "nonfat," that doesn't mean that manufacturers are required to display those claims even if they're applicable.

Nor does it mean that the manufacturers are limited to only putting claims on their packages that are government-regulated: there are plenty of claims and ratings systems that originate with the food manufacturers themselves (for example, Kellogg's 'Get the Facts' program) or other organizations (such as the Whole Grain Council).

The authors selected one representative store from each of the top three food retailers in Canada and recorded all of the descriptive text on the front of packaged foods: everything from the brand and product name to the size of the package and all nutrient or product-specific health claims. They excluded fresh produce, meat, fish, poultry, and dried herbs and spices because they don't typically carry nutrition labelling, and they also excluded foods that are designed for specific populations or uses, such as baby foods. After removing duplicates there were over 20,000 products in their database.

They further coded each product by its level of food processing, using three different food processing classification systems - all similar but not identical. Generally, foods that were considered highly processed are those that "require minimal or no preparation," where "a majority of ingredients are preservatives including stabilizers, emulsifiers, flavours and colours," or "industrially formulated mixtures processed to the extent they are no longer recognizable as their original source."