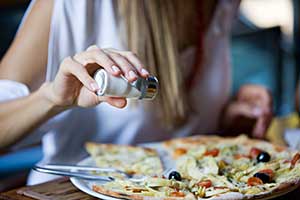 The government created rules back in the 1980s for nutrition information labeling on packaged foods. Before the regulations were passed the only information required was a listing of the ingredients in the package. Other than that we were pretty much on our own and had to guess what might or might not be in any particular food.

Reading a food label can be a bit of a challenge because of all the different numbers one is faced with. While the percentage values are helpful, it’s best to use them only as a guideline. The key numbers are those that show the amount in grams, milligrams or micrograms of each nutrient.

For sodium the percentages listed on packages are based on a total daily intake of 2,000 milligrams (mg). This is a much lower sodium intake than most of us are eating today, with the average American consuming between 4,000 and 6,000 mg per day. There are estimates that place intake much higher -- in the 10,000 mg per day range for western diets (that’s ten GRAMS of sodium).

Even though we have much better research on this now, it turns out that the guideline of 2,000 mg was a pretty good target. For those simply trying to eat healthier, the American Heart Association recommends 2,300 mg per day (this is about the amount in a teaspoon of salt). Most physicians have their patients with conditions such as Congestive Heart Failure (CHF) and hypertension eat less, however, with a target of 1,500 mg.

This may seem low but your taste buds can learn. In one study a group of people was placed on a low-sodium diet for five months. Their taste response to salt in solutions, soups and crackers were measured before and while they were following the diet. During the study period the same measurements were made in a control group that did not change their diet.

In the group that lowered their salt intake, the perceived intensity of salt in crackers increased. In addition, the amount of salt needed for “maximum pleasantness” of taste in soup and crackers fell in the experimental group but not in the control group.

I have found with informal testing of recipes that keeping the sodium levels above 300 mg for a main course dish is about the level that most people find “salty enough.”

The best way to approach reducing your sodium intake is to divide your day into meals with targets at breakfast and lunch under 500 mg sodium and dinner under 1,000 mg. Look at the Nutrition Facts on any package of food and add the total milligrams of sodium for the foods that you are eating.

Dr. Gourmet recipes are labeled as “Low sodium” if a main course dish is under 500 mg sodium and side dishes or other meals are under 250 mg sodium. Here's the listing of Low Sodium recipes.