Serve more, eat more
Just recently a team from Pennysylvania State University and Temple University decided to test that theory: if serving more of the side dishes led to eating more, would a larger portion of only, say, the fruit portion lead to children eating more of both the fruit and the vegetable at the same meal? 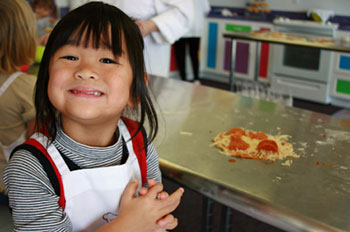 The American Lung Association reports that asthma is the most common chronic condition among children, affecting over 5 million children. It is the third most common cause of hospitalization in kids under 18, and in 2013 alone accounted for over 13 million days absent from school.

Genetic factors and viral infections of the lungs and airway early in childhood are among the most common causes of asthma, but we do know of ways to help reduce the risk of children developing asthma, including a healthy prenatal diet that includes seafood, avoiding smoking during pregnancy and after the child's birth, and breastfeeding.

Certain dietary factors have also been linked to lower risk of asthma, most notably the antioxidants in fruit. But as a team of researchers noted recently in a study published in the journal Public Health Nutrition "People consume a variety of foods and food groups in a meal, rather than individual nutrients or food groups." They noted that it made more sense to look at overall dietary patterns rather than focusing on single foods or food groups, and conducted a review of the existing research that looked at a Mediterranean-style diet in relation to childhood asthma (2017;20(15):2722-2).

The authors identified 15 studies that assessed the diets of over 100,000 children between the ages of 1 and 19 using Food Frequency Questionnaires filled out by the children's parents or the children themselves. Their diets were then assigned Mediterranean Diet scores and their asthma symptoms correlated with their scores.

The majority of these articles (11 of them) were cross-sectional studies, and nearly all showed an inverse association between Mediterranean Diet score (higher score meaning better adherence) and asthma symptoms. As these types of studies are a snapshot of a single moment in time, we can't conclude that a better Mediterranean Diet score prevents asthma, but it's certainly something to take note of.

On the other hand, two of those cross-sectional studies showed no association between Mediterranean Diet score and symptoms, and 1 actually showed an increase in symptoms in 6-7 year old girls. One of the studies showing no association, however, was flawed in that it did not use a standardized tool to evaluate the severity of the symptoms.