More for breakfast linked to eating less overall
You already know that breakfast is important: those who eat breakfast tend to eat more regularly and snack more sensibly, while also having better cholesterol scores and better insulin response than those who skip breakfast. Those who had eggs for breakfast reported feeling more satisfied after meals, while those who ate a high-fiber breakfast tended to eat less at lunch.

Should you eat more frequently? Probably not
Conventional wisdom says that eating more frequently is best is you're trying to lose weight. I've heard everything from 3 meals and 3 snacks per day to 4 small meals, to eating as often as 12 times a day (how people do that is beyond me, but that's what I've heard from patients). There's little actual science that supports those assertions, however.

Breakfast: Correlation is Not Causality
I've been saying for years that breakfast is the most important meal of the day. Here at Dr. Gourmet we've reported on research with a variety of results, including....

The importance of breakfast
(it's not what you think) 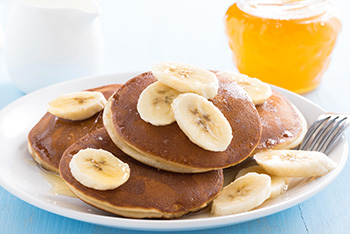 A lot of the talk around breakfast focuses on weight, and nutrition research is no exception. We've seen that eating more of your calories earlier in the day will help with weight loss, that those who skip breakfast have a higher Body Mass Index, and that what you eat for breakfast can help you manage how much you eat later in the day. A recent study appearing the Journal of the American College of Cardiology (http://dx.doi.org/10.1016/j.jacc.2017.08.027) argues that eating breakfast has a bigger impact on your health than just your waistline: it's also good for your heart.

The study is a cross-sectional one - it looks at a snapshot in time and attempts to draw conclusions about the relationships between the participants' reported dietary habits at the time and the results from certain clinical tests. In this case, the authors compare whether, what, and how much the participants ate for breakfast over the previous 15 days and relate that to the results of vascular imaging tests that reveal the amount of plaque in the participants' arteries - along with other risks for heart disease, such as poor cholesterol scores, Body Mass Index, high blood pressure, or diabetes.

The results from the arterial imaging allowed the authors to classify participants as having three increasing levels of atherosclerosis (known colloquially as "hardening of the arteries"): subclinical, noncoronary, and generalized atherosclerosis. After taking into account other risks for heart disease, were those who skipped breakfast more likely to have atherosclerosis?

The authors state that "subclinical atherosclerosis was observed more frequently among the SBF group" and then claim that "We report here, for the first time, evidence of the association between different breakfast patterns such as SBF and LBF and HBF consumption with the risk of atherosclerosis."

That's certainly true as long as you bear in mind that just because A is associated with B, that doesn't mean that A caused B. To be fair, the authors recognize this: their conclusion, like mine, is that "skipping breakfast could serve as a marker of unhealthy dietary and lifestyle behavior" - those in their study who skipped breakfast tended to consume more red meat and cholesterol, sugar-sweetened beverages, and alcohol, and had higher Body Mass Indices, blood pressure, fasting glucose scores, and poorer cholesterol scores. Those who ate a more substantial breakfast tended to consume more fruits and vegetables, whole grains, high-fat dairy products, and sweets (so one could just as easily claim that dessert is good for your heart).

Look beyond the headlines and read the actual content, whether it's a news article about a study or the published journal article on the study itself. Today's article headline is "The Importance of Breakfast in Atherosclerosis Disease," which might make you think that breakfast really has some causal connection with heart disease. This study simply doesn't show that.