Should You Eat More Often?
Conventional diet wisdom says that you should eat every 2 to 3 hours. The claims vary from diet to diet, but eating more frequently than three times a day is supposed to do things like improve your metabolism, reduce hunger, improve glucose and insulin control, and help reduce your body's fat.

Should you eat more frequently? Probably not 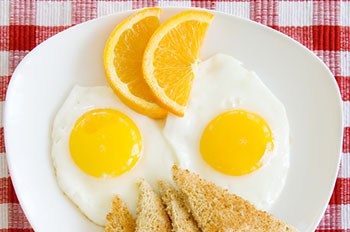 Conventional wisdom says that eating more frequently is best is you're trying to lose weight. I've heard everything from 3 meals and 3 snacks per day to 4 small meals, to eating as often as 12 times a day (how people do that is beyond me, but that's what I've heard from patients). There's little actual science that supports those assertions, however. We've reported on two studies suggesting that eating the majority of your calories earlier in the day - half your daily calories at breakfast rather than at dinner - is better for weight loss. Both of those studies were specifically geared toward looking at the effects of reduced-calorie diets in the context of when those calories were consumed. What's been missing in that research is more long-term, large-scale looks at overall meal timing in people who aren't trying to lose weight.

Today's research addresses that lack (J Nutr doi:https://doi.org/10.3945/jn.116.244749). Researchers headed by a team at Loma Linda University used data gathered through the Adventist Health Study 2, which started in 2002 and as of 2006 had an enrollment of over 95,000 Seventh-Day Adventists who were over 30 at the start of the study and lived throughout the United States and Canada. The study began with a questionnaire that covered demographics, medical history, dietary habits, and physical activity, then the participants were recontacted every two years to get updates on any hospitalizations or major health problems. The fourth followup questionnaire asked participants how often they ate, how much, and when.

For their analysis the authors excluded those participants with extreme, unusual, or unlikely responses (such as daily sleep of less than 4 hours or more than 11 hours, or eating the last meal of the day before 11am), they had information from 50,660 adult men and women for a period that averaged about 7 1/2 years.

The authors note that on average, the participants increased their Body Mass Index by about 0.4 each year. That average is important because those who were over 60 at the start of the study tended to lose weight year upon year, while those under 60 tended to gain weight. Compared to the norm of eating 3 meals per day, those who only ate 1 or 2 times per day tended to lose weight, while those eating more than three meals (that is, having snacks - even 1 snack - between meals) tended to gain weight.

Similarly, those who did eat breakfast also tended to lose weight, while those who waited until lunchtime to eat (defined as a meal between noon and 4pm) gained weight. On the other hand, those with a long overnight fast (earlier dinner and later breakfast) or whose breakfast was the largest meal of the day lost weight while those who ate a late dinner and an earlier breakfast, or whose main meal was at dinner either gained weight or didn't lose as much.

Not only does this appear to torpedo the idea that frequent small meals are better for your weight, it also emphasizes the importance of breakfast. The authors' recommendation? "Eating less frequently (and eating no snacks), consuming breakfast, and eating the largest meal in the morning may be effective long-term preventive tools against weight gain." It can hardly be more straightforward.