Cranberry Juice for UTIs
Judging from the women I see in my practice (admittedly not a very scientific sample, I know), there's a nearly 100% chance that if you are a woman who has ever had a urinary tract infection, somebody has told you to drink cranberry juice to help prevent (or treat) them.

Seeing Red: Cranberries are great for you!
It's not hard to see red during the holidays because cranberries are everywhere at Thanksgiving and Christmas. But they aren't just for the holidays and offer a lot more than just their festive appearance next to the turkey. 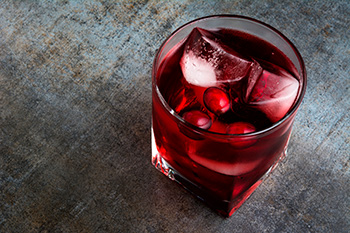 About 60% of women will experience at least one urinary tract infection (UTI) in their lifetime, and as many as 35% will have another UTI within about 6 months. They are usually treated with antibiotics, and with an estimated 10.5 million office and emergency room visits attributed to UTIs, that's a not insignificant contribution to rising rates of antibiotic resistance.

Back in 2013 I reported on a meta-analysis of about a dozen studies looking at drinking cranberry juice to prevent UTIs. The results of the individual studies were mixed, but the more important issue, from the point of view of the authors of the meta-analysis, was the overall poor quality of the studies they were evaluating. Problems with these studies included: short duration, small number of participants, unstandardized dosage, and a large number of participants dropping out of the studies. Any one of these issues can seriously impact the quality (and thus credibility) of the research, and the overall result was that nothing was really proven, scientifically speaking, either way.

The good news is that a team of researchers recruited 322 adult women between 20 and 70 years of age from 17 locations around the United States - and one in France - to participate in a 6-month study evaluating daily cranberry juice consumption on urinary tract infections (Am J Clin Nutr 2016;103:1434-42). These women had no major medical issues but had all experienced at least two UTIs within the year prior to the study's start date, with one UTI within 6 months of the start date.

This is one of those studies that you have to take with a whole shaker full of salt. While the research might be well-designed, large enough, long enough, have reasonably few people dropping out of the study, and use standardized amounts of pure cranberry juice, the funding source irrevocably taints the results. By all means, if you feel that drinking cranberry juice every day helps you avoid urinary tract infections, go ahead and drink it. But be very cautious of anyone who cites this study as "proof" that it works.