Exercise for New Moms
Resuming exercise as soon as appropriate after birth can benefit new moms. Exercise can help a woman recover from birth more quickly and make her more resilient in learning new parenting skills and dealing with night-time feedings. Exercise can help mothers return to a healthy weight in a timely manner. It may even play a role in helping defeat the "baby blues."

How accurate is your wearable activity tracker? 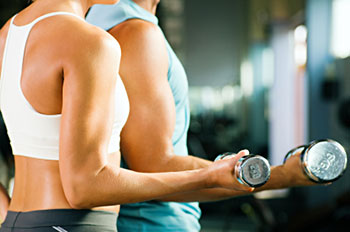 I see a lot of people wearing those activity trackers, like Fitbits, Vivofits, or Misfits. Some are worn on the wrist, some can be worn at the waist, and some can just be carried in your pocket. An app on my iPhone tracks my steps and activity levels, and I can say that it's gotten me to be more active - competing with yourself can be a great motivator.

Some of those trackers purport to measure how many calories you burn over the course of the day, and I know that some of my patients rely on that information to help them lose weight. But how accurate are they, really?

In this month's JAMA Internal Medicine (published online March 21, 2016: doi:10.1001/jamainternmed.2016.0152), a research letter from a team in Japan reports on a small study performed to estimate some popular trackers' validity.

The authors selected 12 different devices to test against the existing gold standards of metabolic measurements: the metabolic chamber method and the doubly labeled water method. Briefly, a metabolic chamber measures an individual's oxygen intake and carbon dioxide expelled, allowing a fairly precise measurement of calories burned. In the doubly labeled water method, participants consume a certain amount of water containing a specific amount of known isotopes of hydrogen and oxygen. These break down in the body in a predictable way and are excreted through the urine, allowing the researchers to estimate with a fairly high degree of accuracy (± 3%) the individual's total energy expenditure. (Note that both explanations are somewhat of an oversimplification.)

A total of 19 adults, 9 men and 10 women between 21 and 50 who were not clinically obese and could perform their daily activities with no limitations, consented to participate in the study. While wearing all twelve of the activity trackers simultaneously (yes, really!), the participants spent one 24-hour period each in the metabolic chamber, performing activities similar to daily life: eating meals, sleeping, exercising on a treadmill, working at a desk. Then for 8 days out of two weeks the participants continued to wear all 12 devices (except when showering or performing other tasks that would make it difficult), and collected all of their urine in airtight containers for doubly labeled water analysis.

The number of calories burned in the metabolic chamber and on the 8 days of urine collection were then compared to the results reported by the activity trackers for those same days. The results? First, the average energy expenditure measured in the metabolic chamber was significantly lower than that measured by the doubly labeled water method - about 9% lower. The measurements from the twelve devices, however, ranged from as little as 2% lower to as much as 25% lower than the water method.

This is a very small study, but it's important to bear in mind that metabolic chambers are extremely expensive to build, maintain and use, so they are not well-suited to large-scale studies that would provide a really accurate look at activity trackers' accuracy. That said, this provides some proof that those trackers are not as accurate as one might wish. If you use these, take their estimates of calories burned as just that - estimates - and rough ones, at that.

You're probably wondering which trackers were most accurate: the top three of the 12 tested were the Omron Active Style Pro and Omron Caloriscan, with the Fitbit Flex coming in third.