Exercise Improves Eating Habits
It's no secret that overeating and sedentary living are the most important factors that contribute to the obesity epidemic that Americans are facing today. We all have great excuses for why we don't exercise.

Can you exercise if you have GERD / Acid Reflux?
For some folks exercising can be a trigger for GERD (acid reflux). As with most triggers exercise may affect some and not others. The general recommendation is to not exercise too soon after eating. Start slow with something simple like walking and keep a diary of your symptoms so that you can learn what will be a trigger for you.

Weight, Lean Body Mass and Exercise
You have finally made a commitment to regularly exercise, build up strength and tone your muscles. You step on the scale a few weeks later to find that you have not lost or maybe even gained weight! You figure that something is wrong with the scale, because your pants are too big and you look and feel thinner. Chances are that your scale works just fine.

Studying identical twins is very important because they help scientists separate what has a genetic cause and what is caused by a person's environment or their lifestyle. Since their genes are the same, generally speaking health differences between the two individuals in a set of identical twins can be traced to lifestyle or environmental factors. 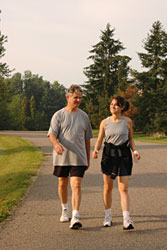 Every now and then I'll hear someone who is overweight say, "I can't lose weight. My whole family is overweight. It's genetic." An interesting article in the International Journal of Obesity (2009;33(1):29-36) says that while that may be true for some people, it doesn't appear to be an unavoidable fate.

Researchers in Finland kept track of all of the twins born in that country between 1975 and 1979. From 2000 to 2002 the twins were sent a health, diet and exercise questionnaire every six months. The questions included information on height, weight, and waist circumference, as well as how much the respondents exercised.

From those twins who responded, the researchers were able to look at the relationship between waist circumference, Body Mass Index, and exercise. They came to some very interesting conclusions:

Waist Circumference in general tended to be lower in those who exercised. This is important when you remember that those who carry their fat around their middle ("apple-shaped") are more likely to have heart disease.

While you may well be genetically disposed to being overweight or obese, there is no excuse for not exercising if you are physically able to do so. Really out of shape? Start walking. Even a 5 or 10-minute walk is better than nothing, and if you do it consistently you'll be able to walk further and further. Small changes can make a big difference!

The First Step to Success: Committing to More than Yourself
How to Begin an Exercise Regimen
Walk Your Way to Better Health
How to Begin a Walking Program
Eating and Exercise: What to eat and when to eat it
Weight, Lean Body Mass and Exercise
Strong Muscles Fight Disease
How to Exercise with Disabled or Weak Legs
How to Conserve Muscle Mass During Weight Loss
How to Build Muscle Mass
How to Build Muscular Endurance
Exercise Ideas: Play Video Games!
Exercise Improves Eating Habits