If you buy it at the grocery store....
Scientists know that asking people to report on their own diet is a flawed means of finding out what people eat. People tend to minimize eating things that are bad for them (the "self-report bias") and over-report eating what they perceive to be good for them (the "social desirability bias"), because they don't want to appear to be unhealthy.

Grocery Store Advertising Circulars
Do you clip coupons or look for deals in those weekly grocery store newspaper inserts? You're not alone. Four out of five newspaper readers at least look at those ads, while 2 out of 3 use coupons clipped from those newspaper circulars. That makes those ads very attractive for food advertisers: in 2010 over $1.6 billion was spent on newspaper advertising.

Good news about adding nutrition labels
You know they're coming: nutrition information on restaurant menus. The federal government has mandated that all restaurants with 20 or more locations must add the number of calories contained in an item to their menus by December 1, 2016. Further, more detailed information, including calories from fat, total fat, saturated fat, trans fat, cholesterol, sodium, total carbohydrates, fiber, sugars, and protein must be available to consumers upon written request. 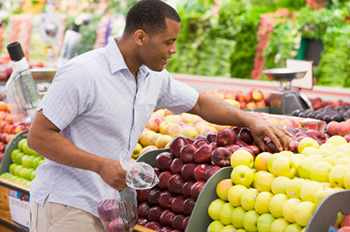 Way back in 2010 I wrote about a study looking at whether college students would make healthier food choices when the foods were labeled with shelf tags that indicated their relative healthfulness. The sales of four categories of foods carrying the labels were analyzed for a five week period and compared with a six week period in which the labels were not on the products. The authors found that in three of the four categories the students were only slightly more likely to choose the healthier items.

You've probably seen some form of this shelf labeling at your own grocery store. The three most popular types include a traffic light-style label, a label with stars (more being better), and a single number called NuVal. This scoring system assigns a number from 1 to 100 (higher being better) to each of over 120,000 different food items based on not just their overall nutrient content but also how that nutrient affects or is linked to health conditions such as high blood pressure, heart disease, or diabetes.

The authors of today's article (J Marketing Res 2015;52(6):817-835) essentially repeat the previous study, but on a much, much larger scale. Instead of four categories, the authors assessed eight: frozen pizza, tomato products, soup, salad dressing, yogurt, spaghetti sauce, granola bars, and ice cream. Instead of about 3,500 potential purchasers, Dr. Nikolova and her team were provided access to the weekly purchase data of over 535,000 American shoppers through their use of a store chain's frequent shopper program card (with all identifying information removed). Finally, instead of five or six weeks of data, the authors were able to analyze a period of six months before the NuVal numbers were introduced in the 1,500 stores and six months afterward.

It shouldn't surprise you that the average scores of the NuVal-labeled foods that people purchased went up about 20%, with the largest improvements seen in canned soup (up by almost 70%), ice cream (almost 30%), and granola bars (almost 25%). Even frozen pizzas that were purchased tended to be healthier by a little over 10%, while spaghetti sauce and tomato products improved by around 6% each.

What's particularly interesting about this research is that the authors also took into account the price of each food purchased. The researchers in the study in college students chose their food categories partially because all the items in each category were priced the same - taking the issue of cost out of the equation. In today's article the authors found that people seemed to be willing to spend more on foods with higher NuVal scores - and were also likely to purchase more of those items at a time when they were on sale.

The authors rightly describe this as a "win-win" for both the grocery store and the consumer: the consumer finds it easier to make healthier choices, while the grocery store will see this as justification for what might be a higher price for healthier items within the same broad food category. I wouldn't mind seeing that happen in the case of processed foods. That said, the good news is that when you're purchasing basic ingredients like produce, whole grains (brown rice), lean meats, and vegetables, you already know they're good for you and the NuVal number on the label (and likely the price) won't vary too much between options. It's unlikely that food out of a box will ever be cheaper and healthier than making your own from scratch (here's my proof, with recipes).