Shopping The Edges of the Grocery Store: Good For You or Myth?
I was thinking about the idea that shopping around the edges of the grocery store is better for you. It's an idea that makes sense on the face of it. You start in the fresh produce section, make your way along to the fish counter, maybe pick up some fresh meat or dairy products and then to the bakery counter.

Grocery Shopping While Hungry
You've probably noticed that it's not a good idea to go grocery shopping when you're hungry. It's all too easy to end up buying a whole bunch of things you didn't plan on buying just because it looked good and you were hungry.

Grocery Store Shelf Tags for Better Food Choices
They're at my local Winn-Dixie, and I bet you'll find them in your local big chain grocery store, too. Some are color-coded, some have multiple stars, and some rely on some sort of complex algorithm to assign a numerical score that's higher for more nutrient-dense foods (this last one is at Whole Foods, among others). 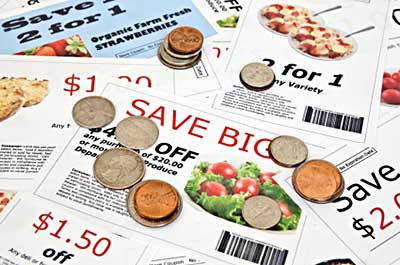 Do you clip coupons or look for deals in those weekly grocery store newspaper inserts? You're not alone. Four out of five newspaper readers at least look at those ads, while 2 out of 3 use coupons clipped from those newspaper circulars. That makes those ads very attractive for food advertisers: in 2010 over $1.6 billion was spent on newspaper advertising.

Somewhat paradoxically, quite a few people are told by well-meaning nutritionists to use those advertising circulars as a guide for their menu planning for the week. The goal, of course, is to help people save money by planning to use what is on sale. That makes plenty of sense, financially, but if you're trying to eat more healthfully, will it really help?

A team of researchers collected 51 advertising circulars, one from each state in the U.S. (And Washington, DC), to look at what types of foods were being advertised and compare those foods to the MyPlate governmental recommendations for healthy eating (Appetite 2013;62:160-165). The circulars were all published on a single, non-holiday week in 2011 and were selected from the major grocery chains for each region.

For each circular, the researchers looked at only the first (most often read) page and analyzed the type of foods advertised along with the amount of space each ad occupied on the page. They could then correlate those food types with the state the ad came from and that state's obesity index.

For those foods included in the five food groups (dairy, protein foods, grains, fruits, and vegetables), the researchers could then compare the amount of space devoted to each food group and compare that percentage to the comparable food groups' space in the MyPlate icon created by the USDA. As you might expect, advertising space bore little resemblance to the MyPlate icon: protein space in the ads was much larger than the space for protein in the MyPlate icon, while the ads for dairy, fruit, and vegetables were all much smaller than their recommended space.

It's debatable whether advertising circulars like these cause people to make certain food choices or if they simply reflect prevailing tastes. Either way, don't use grocery store circulars to decide what to eat. Better to make your meal plan and see if any of that is on sale. In the long run, it will be cheaper and healthier.