Fruits and vegetables are good for your... bones?
In light of the health risks presented by osteoporosis, researchers in Cambridge, England sought to determine whether fruits and veggies could help prevent bone loss (Am J Clin Nutr 2006;83(6):1420-8). They recruited 5 groups of people to participate in their study: adolescent boys and girls, young women between 23 and 37, and older men and women between 60 and 83.

Should you take Vitamin D for your bones?
... back in 2009 I recalled reported on a study that showed that those taking vitamin D were as much as 20% less likely to break a bonethan those who did not. Since that study, however, meta-analyses of multiple smaller studies have shown mixed results with respect to Vitamin D's effects on actual bone mineral density and not just the risk of fracture.

Drink Your Juice and Protect Your Bones

About 10 million Americans have osteoporosis, which is the condition of having low bone density. Most often found in the elderly, it is most obvious in the condition known as "dowager's hump," in which an elderly person's spine is so fragile that they are permanently bent over. Even more seriously, osteoporosis can lead to easily broken bones, even in the large bones such as the hip joints, and can also prevent adequate bone healing in those who have osteoporosis.

Needless to say, with an increasingly elderly population it is important to find ways to help prevent bone loss. We do know that eating more fruits and vegetables is linked to higher bone density, but what we don't know is exactly what in those fruits and vegetables is responsible. It appears that Vitamin C, as an antioxidant and an essential factor in bone formation, may be important. Is there a straightforward link between Vitamin C intake and bone density?

Researchers in three universities in Massachusetts (Tufts, Harvard and Boston universities) collaborated on a study using data from The Framingham Osteoporosis Study, a part of the Framingham Heart Study (J Nutr 2008;138(10):1931-1938). This study is particularly fascinating because it began in 1948 and was a random sample of households in Framingham, Massachusetts. The participants have been part of the study for over fifty years, providing medical and other information to the study every other year. 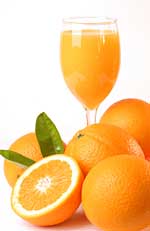 For the study of bone density, those subjects still participating had a bone density exam in 1988-89 and again in 1992-93, both of which looked at two points in their right hip bone and one in their lower spine. Their bone density scores were then correlated with a dietary questionnaire the subjects completed in 1988-89 regarding their regular diet in the previous year.

The researchers analyzed each subjects' diet with respect to their intake of Vitamin C both in food form and in supplement form, and then related those results to other life factors such as age, gender, smoking status (never, used to smoke, current smoker), Body Mass Index, hormone replacement therapy (in women) and so on.

What's really interesting is that because the results were so different for men and women, the scientists separated the two genders for analysis.

Women, on the one hand, had no interaction between smoking status and bone density. Nor was there any association for women between how much Vitamin C they got in their diet (whether it was from supplements or in their food) and their bone density.

As the researchers observed, "Whatever positive effects of vitamin C we observe may not be able to be separated from those of a good quality diet." Or to put it even more simply: you're better off worrying about your diet as a whole than taking vitamin C supplements for your bones.