If It's Not Available, They Can't Eat It
Way back in May of 2007 I reported on the Intitute of Medicine's report and recommendations for school nutrition standards. In that News Bite I mentioned that the Institute recommended specifically that each school district limit their students' opportunities to choose foods that are not nutritionally approved. 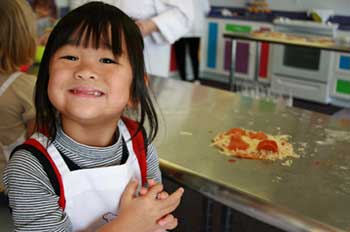 Back in 2012 I shared with you a study that showed that when preschoolers are presented with larger servings, they tend to eat more. On that occasion I pointed out that parents who were trying to get their children to eat more vegetables could make that work for them by serving larger portions of vegetables at mealtimes.

This can be a great strategy if you're serving those vegetables alongside age-appropriate servings of main courses. On the other hand, a team of researchers sponsored by the US Department of Agriculture, Agricultural Research Service (USDA/ARS) and partially funded by both the National Institutes of Diabetes and Digestive and Kidney Diseases and Kraft Foods, Inc. has found a way that strategy might backfire (Am J Clin Nutr 2014;99(4):763-70).

They noted that the types of research into children's eating behaviors I mentioned above is performed in "tightly controlled laboratory studies." Reasonably, they wondered how that might play out in the home - and given that most dinner meals with preschoolers include at least one adult, did what the adult serve themselves have any relationship with what was served to the child or how much of it they ate?

From the Head Start centers in Houston, Texas, the researchers recruited 145 parents with a preschool-age child to participate in an in-home observation of up to 3 dinner meals. During these meals, the parents used standardized sizes of plates and other dishes provided by the research team, but otherwise cooked and served the food of their choice as they normally would. The researchers photographed the individual plates and weighed what was not eaten after the meal; trained dietitians later reviewed the photographs and estimated the initial amounts served, allowing the researchers to estimate the amount of food consumed. The parents provided detailed information on the food served, from recipes to prepared-food labels, so that the researchers could calculate the number of calories served.

Unsurprisingly, the researchers noted that the larger a portion the child was served, the more calories the child consumed. What's interesting is that the more the parent served themselves, the more they served to their child - as much as over 2,500 calories at one meal.

The team noted that the amount served to the child at these three dinner mealtimes did not appear to relate to the child's BMI: a child who tended to be served more at mealtimes was no more likely to be overweight (by pediatric standards) than those children who tended to be served less. This reveals one of the drawbacks of this study: only one mealtime was observed and recorded - there was no way, given the design of the study, for the researchers to know what or how much the child had eaten the rest of the day, nor could they know how active the child was.

The take-home message here is simply a reminder that preschool-age children need about 1,500 calories per day - plus snacks if they are active. If you're working on your weight, chances are that's about how much you should be eating, yourself. Here are some good ideas for kids' snacks (that are good for parents, too).