Fiber for Breakfast Keeps You Satisfied
Recently researchers in Sweden compared the effects on appetite and satiety of eating rye porridge for breakfast or a similar number of calories of whole wheat bread (Physiol Behav 2012 Feb 1;105(3):877-84). Why rye porridge? When rye grains are processed into whole grain rye flakes for porridge the grains retain some of their original structure, leaving the resulting porridge very high in fiber. They chose porridge because it has a low energy density compared to the volume of the food.

Breakfast: Correlation is Not Causality
A common pitfall in interpreting research is mistaking a relationship between two facts (correlation) with one of the facts directly causing the other (causality). A good illustration of mistaking correlation with causality is as follows: "It's hot during the summer. There are more murders during the summer. Hot weather causes murders." While the facts might be true when taken at face value, given the number of other factors that are involved, there's still no evidence that hot weather directly causes homicide. 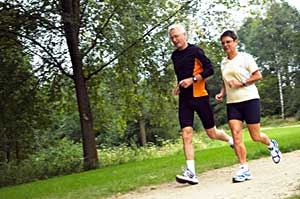 Some of my more exercise-dedicated patients like to hit the gym or go for a run in the morning, before work, but quite a few of them don't eat beforehand. "I don't have time," they say. Many of them will have some kind of breakfast after they get to work: the more health-conscious might have some microwave oatmeal or a breakfast bar, while others throw themselves into their day and don't eat anything significant until lunch. Aside from the effects of skipping breakfast on health and weight loss (more about that here), researchers are also interested in the effects of exercise and breakfast on one's overall mood and mental sharpness.

Twelve healthy young men, used to regular exercise and able to run for a minimum of 1 hour without stopping, were recruited for a research study in the United Kingdom designed to look at the effects of eating breakfast before or after exercise (Appetite 2013,68:38-44). Each participant visited the exercise lab on four occasions to participate in four different trials.

Upon arrival, each participant completed several tasks intended to measure their cognitive function and responded to a mood questionnaire. They then proceeded to one of four trials presented in a random order for each participant:

At regular intervals throughout the testing periods the participants repeated the cognitive and mood tests, with a final set of tests after lunch.

The researchers could then compare each participant's test scores in each trial session to find out how those test scores differed based on whether they had breakfast or not and whether they exercised or not. What they found is very interesting. Those who did not have breakfast performed better on some cognitive tasks than those who did eat breakfast, but exercising after breakfast reversed the effect. On the other hand, skipping breakfast and then exercising led to more mental fatigue and higher tension, although those who skipped breakfast and did not exercise also reported higher tension. All of these results were following the chocolate milk drink.

This is a very small study, so what this really means is that larger studies are needed. That said, I would suggest that those who make the time to exercise in the morning would do well to also make time for a little breakfast. As a cyclist and runner myself, I know that eating too much before exercise can sometimes upset your stomach, but it's also important for your body to have fuel for that exercise. A small bowl of cereal or an egg and a piece of toast take just a minute or two (hard boiled eggs can be made ahead of time). You'll feel better, emotionally and mentally (and physically).