Weigh Yourself More to Weigh Less
It's not easy to lose weight and keep it off, and there's no shortage of advice on how to do it. One frequently-mentioned strategy is to weigh yourself regularly. Like a lot of weight-loss strategies, however, these recommendations for regular weigh-ins are mostly based on anecdotal evidence - not scientific study.

Trying to control your weight? Get some more exercise 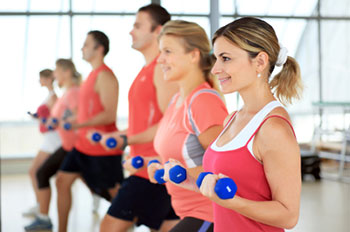 Despite the fact that Americans spend over $50 billion per year on weight loss products and services, one-third of adults are still obese. To combat this, in 1998 the National Institute of Health recommended that adults get a minimum of 30 minutes of high-intensity exercise, 5 days per week (150 minutes/week), in addition to reducing calories consumed.

In 2005, the U.S. Department of Health and Human Services and the Department of Agriculture raised that minimum weekly requirement to 60 minutes per day, five days per week (300 minutes/week). Yet Americans don't seem to be losing weight. Researchers at the Center for Disease Control in Atlanta sought to find out what strategies for weight loss or maintenance Americans are actually using to combat this epidemic of obesity (Am J Prev Med 2006;31:18-24).

The researchers analyzed data from the 2001-2002 National Health and Nutrition Examination Survey conducted on a nationally representative sample of the U.S. population. The 4,354 subjects (2,209 men and 2,145 women) were 20 years of age or older. They were asked if, during the last 12 months, they had tried to lose weight, tried not to gain weight, or neither, and if they did try to control their weight, what strategies they used. They were able to select what strategies they used from a list that included eating less food, eating less fat, exercising, switching to foods with lower calories, and other, less-common strategies like skipping meals, taking diet pills or supplements, drinking lots of water, or adhering to specific diet plans (like Atkins, the grapefruit diet, or Overeaters Anonymous).

For those who specified exercise as one of their chosen means of controlling their weight, the scientists also asked about the type of exercise they performed, how long it typically lasted, and the number of days per week they exercised.

In addition to eating healthy and controlling your caloric intake, regular, vigorous exercise is key to weight maintenance and weight loss. If you're not getting your 30 minutes, 5 days per week, make it a priority in your life, just like eating healthy. Take a walk after dinner with your loved ones or bicycle to and from work every day. Once you've made exercise a habit, you'll feel so great you won't know how you lived without it.