Good Food News for Breast Cancer Survivors
Estrogen plays an important role in breast cancer, and estrogen-blocking medications such as tamoxifen are widely used to help prevent recurrence. This quite reasonably has led to concern about foods containing phytoestrogens - naturally-occurring estrogen receptor modulators that are seen mostly in the form of isoflavones. (Remember that isoflavones are types of flavonoids, like those in red wine.)

It's become one of those emails that people seem to forward obsessively, along with the ones about waking up with a kidney missing and anti-perspirants leading to breast cancer (there's no proof of that, either). Except this one was true: almost a year ago there appeared a study in the British Journal of Cancer that seemed to link eating more than 1/4 of a grapefruit each day to an increased incidence of breast cancer. A lot of women I know - patients and colleagues among them - quit eating grapefruit completely.

Good news! Recently another study appeared in the British Journal of Cancer (2008;98(1):240-41) with completely different conclusions. 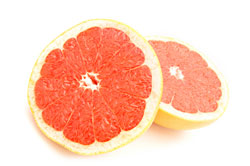 The authors of this study made use of information gathered during the Nurses' Health Study, a large-scale, long-term study which has been following the lives of thousands of women in the United States since 1976. (This is a much larger study than the one I reported on last year.) Starting in the mid 1980's, the participating women reported on their diet every four years. Questions included information about their consumption of grapefruit.

The researchers analyzed the diets of those women in the study who were diagnosed with breast cancer and found no link between grapefruit intake and incidence of breast cancer. This was true regardless of their Body Mass Index, whether they smoked, or other variables.

The scientists further note in their report that for those women whose cancers were estrogen and progesterone negative, an increased consumption of grapefruit (the fruit, not the juice) was also related to a reduced risk of breast cancer.