Soy intake and metabolic syndrome
While this syndrome may have some genetic links, it's clear that what people eat can play a large role in each of the symptoms that make up the syndrome. We also know that simple changes in diet can often help reduce or eliminate these symptoms. But which ones might be most effective?

Red Meat and Breast Cancer in Women
There have been links to an increased risk of cancer in those who eat higher amounts of red meat. So far this has not been shown in women with breast cancer, however. In a study published this week a group of researchers looked at a large number of women to determine if this might be the case (Arch Intern Med. 2006;166(20):2253-2259).

Body Mass Index Also Linked to Cancer Risk
When I see patients for physicals these days, I spend time discussing their risks for various illnesses. Part of this discussion includes a review of their Body Mass Index (BMI) and Waist to Hip Ratio (WHR), and usually this discussion is in the context of risk of heart disease, high blood pressure, diabetes and stroke.

Soy and Your Risk of Breast Cancer

Many cancer docs tell those women with estrogen-receptor positive breast cancer to avoid eating soybeans. Why? Because they contain a comparatively high level of isoflavones (phytoestrogens), which are naturally occurring chemicals that resemble natural estrogen. Soybeans (edamame) are a major source of protein in the Asian diet, and at least one study has reported that Chinese women who eat a lot of soy actually have a reduced risk of breast cancer. Which is right? 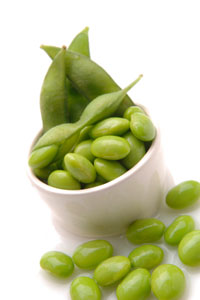 Researchers at the University of Southern California and the University of Minnesota recently looked at 28 studies of soy intake and its effects on breast cancer risk (Brit J Cancer 2008; 98(1):9-14). Six of those studies had focused on people in Asia, while the other 22 took place in Western countries. Those women in the studies who ate a traditional Asian diet averaged eating 25 to 50 milligrams of isoflavones per day, because soy is such a major source of protein in their diet.

People who follow a more traditional Western-style diet—like those in the United States and the United Kingdom—get most of their protein from animal sources. A Westerner's typical daily intake of isoflavones is under 1 milligram per day.

Most Westerners would have to change their diets and eat A LOT of soy to make a significant difference in their risk of breast cancer. You’d have to eat easily at least 20 times what you get now. Unless your oncologist says you should do otherwise, it's unlikely that eating soy (or not eating it) will have an effect on your risk of breast cancer.