Is Drinking Grape Juice the Same as Drinking Red Wine?
Is there a substitute for red wine? Perhaps grape juice made from grapes rather than concentrate? I do not drink alcohol at all and would not do so even for the benefits of red wine.

Sparkling Wines are (Also) Good for You
Moderate alcohol consumption is a part of the Mediterranean Diet, and several studies I've discussed in the past have linked alcohol specifically with a reduced risk of heart disease. We do know that artherosclerosis is actually a chronic, low-grade inflammation of the wall of the artery, and other studies suggest that alcohol may have an antiinflammatory effect, leading to that reduction in risk. Just what substance in alcohol has that effect is still uncertain. 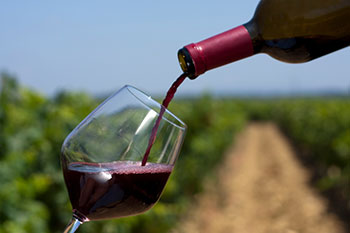 One of the interesting things about scientific research is that sometimes you start out to discover one thing and end up finding something else. Recently a group of scientists from the University of Minnesota set out to investigate whether a diet rich in flavonoids (an antioxidant found in fruits, vegetables, and beverages like tea or wine) might help reduce the risk of Type 2 diabetes (J Nutr 2006;136:3039-3045).

They utilized data from a large prospective study of postmenopausal women known as The Iowa Women's Health Study. At the beginning of the study over 40,000 women were asked about their height, weight, medication use, exercise, and other lifestyle habits as well as background questions. They were also given a questionnaire asking about their "usual diet", using a food questionnaire listing over 125 items. In five follow-up surveys sent over the next 18 years, the women were asked if they had been diagnosed with diabetes (among other follow-up items).

Alcohol appears to be good for you in moderation, but some medications may interact with it, so check with your doctor. If you drink, remember that all alcohol contains calories: about 100 calories per four-ounce glass of wine, about 150 calories per 12-ounce serving of beer, and about 75 calories per ounce of distilled spirits such as whiskey or vodka. Keep this in mind during those holiday parties!