Is Drinking Grape Juice the Same as Drinking Red Wine?
There is good evidence that drinking grape juice has many of the same benefits as drinking red wine. The antioxidant polyphenols in red grape juice have been shown to have positive effects on cholesterol in the same way as red wine. Much of the research that has been done is in the test tube and there are not large scale trials in humans to support this yet.

Does wine affect weight loss?
Even though that glass of wine has about 150 calories, those who drink alcohol on a regular basis have a lower risk of being obese. In a study published in 2005, Drs. Ahmed and Rohrer looked at over 8,000 participants in the Third National Health and Nutrition Examination Survey. 46% of the respondents were classified as "current drinkers." This group was much less likely to be obese.

Sparkling Wines are (Also) Good for You
Moderate alcohol consumption is a part of the Mediterranean Diet, and several studies I've discussed in the past have linked alcohol specifically with a reduced risk of heart disease. We do know that artherosclerosis is actually a chronic, low-grade inflammation of the wall of the artery, and other studies suggest that alcohol may have an antiinflammatory effect, leading to that reduction in risk.

"Free radicals" are natural and normal side effects of your body's processing of oxygen into energy. "Antioxidants" are those molecules that help your body remove those free radicals before they can contribute to such conditions as heart disease, stroke and diabetes. Researchers believe that as the body ages the process does not work as well, which may help explain why older people appear to be more likely to have these conditions. 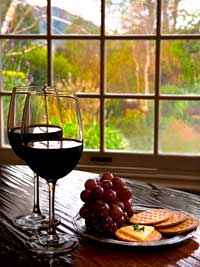 Studies have shown that drinking moderate amounts of alcohol has helped those with heart disease avoid heart attacks as well as improving their cholesterol scores. Red wine, in particular, contains a high amount of antioxidants called polyphenols.

Researchers in Australia (Nutrition Journal, 2007; 6:27) designed a study using two sets of volunteers: 20 young men and women (ages 18-30) and 20 older men and women (over 50 years of age). For two weeks, half of each group drank 400ml of wine each day but otherwise avoided grapes and grape products. The other half avoided alcohol of all kinds, grapes and grape products for two weeks. For the following two weeks all of the volunteers returned to their normal diets in what is known as a "washout period." In the next two weeks the groups switched – those who

Blood tests revealed that those who drank the red wine each day had higher levels of antioxidants in their bloodstream and decreased levels of a substance used to measure the damage that free radicals do to cells.

In theory, older volunteers would see greater benefits from the antioxidants in red wine, but that was not the case. The positive effects of drinking red wine was about the same regardless of age.

If you're in the habit of having a glass of wine (or two) with dinner, consider this even more reason to continue. If you don't drink, this doesn't mean you should start, however. It appears from other studies that grape juice may be just as good for you as wine. Or just eat grapes!