More evidence that breakfast may not be as important as previously thought
Late last year I reported on a small study that suggested that when eating breakfast - regardless of the content of the breakfast - study subjects consumed about the same number of calories each day and made about the same food choices at the next meal in the day (lunch).

Lose More Weight with a Big Breakfast
I've said for years that breakfast really is the most important meal of the day. Skipping breakfast appears to reduce your metabolism while actually delaying fat burning and increasing fat deposition.

Feel Fuller While Dieting
We know that breakfast can help you lose weight and that those who skip breakfast tend to have a higher Body Mass Index than those who do eat breakfast. If you eat breakfast, you're also less like to snack during the rest of the day and are less likely to have heart failure.

Will fewer carbohydrates at breakfast help you lose weight? 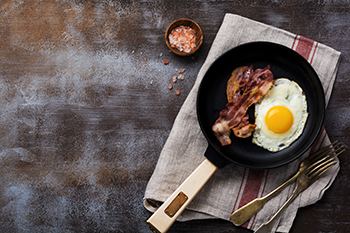 A study just published in the journal Nutrition seems to show that in the context of eating fewer calories overall, eating fewer carbohydrates at breakfast may help you lose more weight (doi.org/10.1016/j.nut.2019.110578).

A team of researchers in Athens, Greece noted that people seem to have a fair amount of success at losing weight with a low-carbohydrate diet, although "long-term adherence to a strict low-carbohydrate dietary regiment may prove difficult for many people, leading to... weight regain."

There are several theories as to just why carbohydrate restriction works so well, with ideas ranging from people simply consuming fewer calories to carbohydrate restriction causing lower insulin levels and thus greater fat utilization ("fat burning"). There's some evidence for both - but the fact that people find the diet hard to stick to can not be ignored.

With this in mind, the authors designed a study that combines a traditional reduced-calorie diet with cutting carbohydrates only in the morning. Why a low-carb breakfast? The authors thought that extending the overnight carbohydrate fast into the morning hours might induce the body to continue burning fat through that same period.

They recruited 70 overweight and obese men and women to participate in their 2-month study. Working with dietitians, the authors calculated the appropriate number of calories each participant required to maintain their weight, then designed a weight loss diet individualized to that person that reduced their caloric intake by 700 calories (500 if that reduction resulted in a caloric intake under 1000 calories per day).

The participants followed a Mediterranean-style diet high in whole grains, legumes, vegetables and fruits, fish, and nuts, with moderate intake of dairy and low intake of red meats, saturated fats, and refined carbohydrates. Their diets were designed to provide an overall daily intake of 60% of calories from complex carbohydrates, 15% from protein, and 25% of calories from fat.

Dietitians met with the participants weekly for the first month and every two weeks in the second month to help the participants stick with their assigned diets. At the start and end of the study the participants were weighed, their Body Mass Index calculated, their waist circumference measured, and blood tests were performed. Their body fat mass was measured with a consumer scale that measures body fat through bioelectrical impedence.

At the end of the study both groups had lost weight, reducing both their Body Mass Index and waist circumference, but those in the low-carb breakfast group lost, on average, about 3.5kg (about 7.5 pounds) more than those in the typical breakfast group, and lost about 3 more pounds of fat (again, on average).

The authors state that "This study demonstrated that carbohydrate restriction in the morning hours enhances the weight loss effect of a hypocaloric Mediterranean diet in overweight and obese individuals."

Would a less drastic reduction in calories have the same effect of significantly greater weight loss? This study was designed to maximize the amount of weight each group lost, thereby magnifying the short-term effect.

If you decide to try this approach, remember that this is in the context of a reduced-calorie diet - simply switching from cereal or toast to cheese and sausage in the morning is in my view unlikely to cause weight loss (not to mention the known health risks of processed meats).