Drinking Sugary Beverages Makes You Gain Weight
Drinking too many sugar-sweetened soft drinks has been linked to overweight and obesity along with such chronic illnesses as high blood pressure, diabetes, heart disease, gout, gallstones, and kidney disease. Research attempting to directly link sugar-sweetened beverages such as sodas and sweetened fruit drinks to weight gain have been questioned because other factors can affect weight other than the beverages you drink.

Women, Soft Drinks, and Stroke
In a study recently published in the American Journal of Clinical Nutrition (2012;96(6):1390-7), researchers in Japan noted that those studies that looked at the association between heart disease and soft drinks were mostly done on women. That said, the effects of soft drinks on cholesterol levels and other metabolic markers seem to be stronger in women than in men.

Just one soft drink per day increases your risk of death 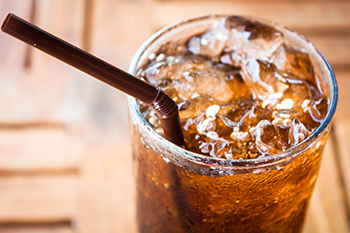 It's clear that sugar-sweetened soft drinks contribute to weight gain and even diet (non-caloric) soft drinks are implicated in weight gain for reasons we have yet to fully understand.

Recently an international team of researchers published the results of their analysis of data from a multi-national, long term observational study known as EPIC (European Prospective Investigation into Cancer and Nutrition)(JAMA Int Med doi:10.1001/jamainternmed.2019.2478). Their analysis focused on soft drink consumption overall as well as differentiating between sugar-sweetened and artificially sweetened soft drinks.

The EPIC study recruited over 500,000 participants in 10 European countries between 1992 and 2000 and followup is ongoing. These participants responded to demographic and dietary questionnaires and gave permission for the researchers to access their medical information, including cause of death if necessary, often through the individual countries' health systems.

For their analysis, the authors excluded any participant who reported having cancer, heart disease, diabetes, or history of stroke of any kind. Similarly, they excluded those with unrealistic or incomplete dietary questionnaires. This left them with over 450,000 participants when they performed their analysis in 2018.

(How many glasses of soft drinks, whether sugar-sweetened or not, do you drink per day? Where would you fall in the classifications above?)

After an average of just over 16 years of follow-up, the authors correlated the soft drink consumption of those who passed away with those who did not, taking into account such variables as Body Mass Index; alcohol consumption; smoking status; age, gender, and education level; total caloric intake as well as intake of red and processed meats, coffee, fruits and vegetables (and their juices); and physical activity levels.

Their results are concerning.

Those who consumed at least 2 glasses of artificially sweetened soft drinks every day were 26% more likely to die of any cause compared to those who drank less than 1 glass per month of a soft drink of any kind.

Those with a BMI over 30 who drank 2 or more glasses of sugar-sweetened soft drinks per day were at a 23% greater risk of death from all causes as compared to those who drank less than 1 glass of sugar-sweetened soft drinks per day, while the risk for those with a BMI between 25 and 30 was the same as those who were of clinically normal weight (not increased).

More specifically, drinking any soft drinks contributed to the participants' risk of death from circulatory diseases like heart disease or cerebrovascular diseases, while drinking sugar-sweetened soft drinks alone did not appear to affect that risk. On the other hand, drinking at least 1 sugar-sweetened soft drink every day meant a 59% greater risk of dying from a digestive disorder that includes liver, esophageal, and gall bladder disorders.

Consuming more soft drinks, whether sugar-sweetened or not, also appeared to contribute to a participants' risk of death from colon cancer, but not breast cancer or prostate cancer.

Finally, although Alzheimer's disease did not appear to be linked to soft drink intake, the authors found that drinking at least one glass per day of any type of soft drink meant a 59% greater risk of death from Parkinson disease, with similar associations for both sugar-sweetened and artificially-sweetened soft drinks.