Fried Foods and Gestational Diabetes
A recently published article (Diabetologia DOI 10.1007/s00125-0141-3382_x) indicated that women who eat fried foods more than once per week increase their risk of getting gestational diabetes during their pregnancy.

How the Standard American Diet (SAD) affects the brain
The agricultural and industrial revolution made fats and sugars more available and affordable, leading to a typical American diet that is high in fat and refined carbohydrates (high in sugars and simple starches) and low in complex carbohydrates and fiber. Low fruit and vegetable intake have also contributed to the reduction in the amount of fiber in American diets. Because of the convenience and low cost of processed foods, many convenience food items produced in mass quantities are high in chemical content.

Fried foods: just how bad are they? 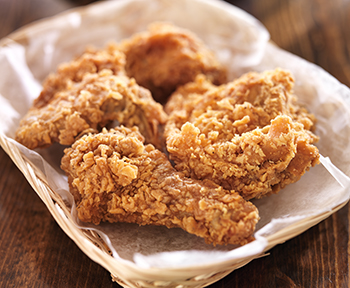 A team of researchers in Iowa decided to use data from the Women's Health Initiative, a long-term, large-scale observational study, to see if there were a relationship between consuming fried foods and the risk of death from cancers, heart disease, or any cause overall (known as "all-cause mortality") (BMJ 2019;364:k5420 doi 10.1136/bmj.k5420).

The Women's Health Initiative began recruiting women participants who were between the ages of 50 and 79 between 1993 and 1998. At the start of the study the participants provided demographic and health background information, and responded to a detailed dietary questionnaire that included specific questions about fried foods, from the common ones like fried chicken fried fish, and french fries, to foods you might not think of as fried, such as potato or tortilla chips, pork skins, and fried rice.

After excluding women who were participating in a low-fat diet (one arm of the original study) and women with incomplete data or unlikely responses to the food questionnaire, the authors included over 106,000 women in their final analysis, which included data and cause-of-death information through February 2017.

The authors compared the diets and causes of death of women who died during the study with those who did not, breaking down "fried foods" into three types: fried chicken, fried fish or shellfish, and all other fried foods. Each type of fried foods was further broken down into frequency of intake, from "none" to "1-2 servings per week," "3-6 servings per week," and "at least one serving per day."

After taking into account the overall quality of the participants' diets along with other factors such as age, smoking status, hormone use, Body Mass Index, and medical history, the authors found that those women who consumed at least 1 serving of any fried food every day were 8% more likely to die of any cause than women who did not eat fried foods.

A weekly serving of fried fish or shellfish, on the other hand, was slightly less risky, at only a 7% increase in death from any cause.

Risk of death specifically from heart disease was also higher when participants ate more fried foods, but these increases were not considered statistically significant. Risk of death from cancer, however, was not associated with eating fried foods.

This is a large and long-term study, but it can still only show a relationship between fried food consumption and risk of death - we can't conclude that eating fried food causes higher death rates. The authors also note that those who tended to eat more fried foods tended to have a lower quality of diet overall, weighed more, and were less well educated than those who ate the least amount of fried foods.

This simply reinforces what we already know: eating a lot of fried food is bad for you. Save your fried chicken or fried fish for a special treat (once a month or less), or make your own at home with these recipes:
Healthy French Fries
Oven Fried Fish | Oven Fried Fish - Low Sodium Version
Chicken Fried Steak
Healthy Buttermilk Fried Chicken | Healthy Gluten-Free Buttermilk Fried Chicken