Exercise for Your Brain
Remember the nine areas of the Mediterranean-style diet? In this study, those whose diet matched the Mediterranean diet in 6 to 9 areas had a 60% lower risk of developing Alzheimer's than those whose diet only matched in 1-3 areas. With this in mind, researchers in New York, New York sought to find out if the amount of exercise an individual participated in would also have any effect on their risk of Alzheimer's Disease. 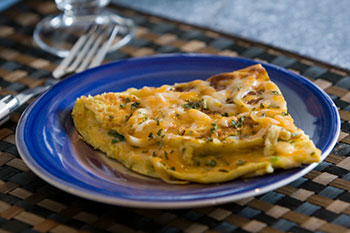 In addition to increasing your risk of heart disease, poor cholesterol scores have been linked to a greater risk of developing dementia and the formation of the plaques that characterize Alzheimer's Disease. For decades eggs, with their relatively high levels of cholesterol, were considered foods to avoid for those with poor cholesterol scores. More recently, however, we have learned that for the vast majority of people the cholesterol you consume has far less effect on your cholesterol scores than the amount of saturated fat in your diet.

At the start of the study the participants filled out a 4-day food record with the assistance of a trained nutritionist and provided blood samples for cholesterol tests. They also responded to a detailed demographic and health history and had their blood pressures taken. Four years later about 500 of the oldest men participated in cognitive performance tests that measured language facility, long- and short-term memory, and visual memory.

They found that the neither the number of eggs nor the amount of dietary cholesterol the participants consumed were linked to an increased risk of Alzheimer's or dementia, even when the participant carried the Apo-E4 gene. Indeed, the surprising result was that those who consumed a moderate number of eggs (averaging less than 1 per day) performed better on the cognitive tests and may even reduce the overall risk of Alzheimer's.

This is another study whose results should be approached with caution: those who consumed more eggs might have other characteristics that influenced their risk of dementia or Alzheimer's. The take home message is still that for the vast majority of people, eggs are okay in moderation.