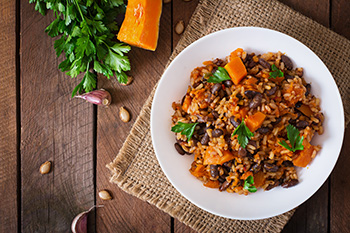 Today's research article notes that there is a long-standing association of obesity with chronic pain. That might seem obvious to you - obesity puts a lot of stress on the body, including greater back pain and pain in the joints from the strain of moving and bearing excess weight. But are there other ways that obesity contributes to pain? We know that excess fat contributes to increased inflammation, and inflammation contributes to pain. If so, then might foods that we know are anti-inflammatory have some effect on that pain?

A team at Ohio State University designed a study to assess the relationship between obesity and pain and whether diet might have some influence on pain levels. They recruited 49 otherwise healthy but clinically normal weight men and women and 49 clinically obese men and women, all between the ages of 20 and 78, to participate in their study, taking care to match the participants in the two groups as closely as they could with regard to sex, age, race/ethnicity, and level of education (Pain 2017;158:273-77).

The participants were visited at home by trained interviewers, who administered a standardized dietary questionnaire designed to assess the participant's adherence to the Healthy Eating Index 2010 (HEI-2010), which corresponds to the 2010 Dietary Guidelines for Americans. They also measured height, weight, and waist circumference, and used a bioimpedence analyzer to measure body fat. Further, they administered standard clinical surveys designed to assess physical pain as well as anxiety or depression.

The researchers controlled for diagnoses of arthritis or reports of joint pain, took into account whether the participants were taking pain medication, and finally tried using waist circumference and body fat instead of BMI, but it was still clear that the HEI-2010 score had a significant effect on pain. Finally they broke out the 12 components of the HEI-2010 to discover that only a higher intake of seafood and plant proteins was responsible for the dietary effect on pain.

This is a cross-sectional study based on the participants remembering what they ate in the last 24 hours, which is subject to the vagaries of human memory as well as the possible desire to be seen to eat more healthfully than one does. That said, this does suggest that a healthier, anti-inflammatory diet like the Mediterranean Diet, with its emphasis on higher intake of seafood and legumes, including beans, lentils, and soybeans, can help counteract the pain associated with obesity.