Obesity and Subclinical Heart Disease
When a patient meets certain set criteria for a disease or condition, we doctors say that they have clinical [disease or condition]. For example, the World Health Organization and the National Institute of Health have designated a Body Mass Index of 30 or more as clinically obese. On the other hand, with some conditions a patient might have the condition, yet not show symptoms, and that is called subclinical [condition].

Whole grains reduce your risk of Type 2 diabetes and heart disease
Metabolic syndrome, for those who might not be long-time readers of Dr. Gourmet's Health and Nutrition Bites, is a combination of abnormal lab results and body measurements that, taken together, lead to a greater risk of developing type 2 diabetes, heart disease, stroke, and heart attack.

Finding a direct link from sodium to heart disease 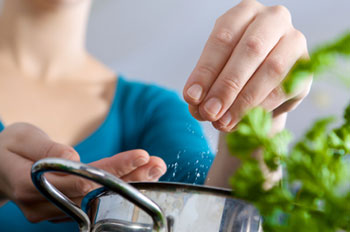 I like to tell my medical students that "medicine is not math." Remember that Transitive Property of Equality you might have learned about in Algebra? Where if A = B and B = C, then A always equals C?

Medicine is not like that. (Would that it were!) In medicine, sometimes A = B and B = C, but A has no relation to or effect on C.

Recently there have been studies published that have suggested that lower levels of sodium intake actually increase one's risk of dying from cardiovascular disease. Other studies showed an increase in risk of developing cardiovascular disease at the highest and lowest levels of sodium intake. Since these studies contradict current public health efforts to reduce people's sodium intake, naturally the media jumped on them. You've probably heard something about all this. The problem, however, is that those studies were not well designed: problems ranged from participant selection (people with existing illnesses, for example) to inexact measurements of participants' sodium intake (some of which were estimates based on questionnaires about people's diet).

The researchers excluded those who were specifically assigned to sodium reduction and averaged the sodium intakes tested via urine collection for the remaining ~3,000 individuals. They then grouped the participants into four increasing levels of dietary sodium: <2,300 milligrams per day, 2,300 to <3,600 per day, 3,600 to <4,800, and over 4,800 milligrams per day.

After taking into account such variables as Body Mass Index, exercise, or smoking levels (including whether any of those changed), ethnicity, and family history of heart disease, they discovered that compared to those who were consuming 3,600 to 4,800 milligrams of sodium per day, those who kept their sodium intake under 2,300 milligrams (the current recommendation for the majority of people) were 32% less likely to experience a cardiovascular event such as heart attack or stroke. In fact, every additional 1,000 milligrams of sodium over 2,300 milligrams increased an individual's risk by 17%.