Beverages Aren't Satisfying
I've reported before on the observed link between soda intake and Body Mass Index. Researchers at Purdue University noted that soda is by no means the only beverage people drink. Also popular are those high-fat coffee drinks like lattes and blended cappuccinos, as well as high-protein sports drinks and specialized waters.

Drinking Sugary Beverages Makes You Gain Weight
Drinking too many sugar-sweetened soft drinks has been linked to overweight and obesity along with such chronic illnesses as high blood pressure, diabetes, heart disease, gout, gallstones, and kidney disease. Research attempting to directly link sugar-sweetened beverages such as sodas and sweetened fruit drinks to weight gain have been questioned because other factors can affect weight other than the beverages you drink. 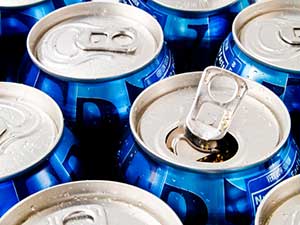 You're probably well aware that drinking sugar-sweetened beverages like sodas or sweetened fruit juices can lead to overweight or obesity through the additional calories they contain. And you're probably also well aware that those who are overweight or obese are at an increased risk of health problems ranging from diabetes to heart disease to cancer.

That's why adolescent overweight and obesity is a such a concern. These are, after all, future adults: future employees, future parents, future soldiers and artists and bus drivers and doctors and so on.

Now it seems that kids who drink too many sugar-sweetened beverages are at risk even if those additional calories do not lead to excess weight.

Between 1989 and 1991, nearly 3,000 pregnant women in Western Australia were recruited to participate in a study of themselves and their families. The children those women bore became part of today's study (Am J Clin Nutr 2013;98(2):327-34) as researchers made use of information gathered when these children were 14 and again at the age of 17. Along with a dietary questionnaire, the childrens' weight and height were measured, their blood drawn for testing, and their blood pressure taken.

The researchers looked at the amount of sugar-sweetened beverages the children drank at both points in time and correlated those amounts with the childrens' Body Mass Index and Waist Circumference (according to pediatric, not adult, standards), as well as looking at choleerol and glucose scores and blood pressure.

As you might expect, those who started out drinking the lowest level of sugar-sweetened beverages who increased their intake over the four years to the highest level of intake were more likely to be overweight or obese.

What's really concerning, however, were the scores the researchers saw after controlling for Body Mass Index: those who increased their intake also lowered their HDL cholesterol score (the good cholesterol) by 5.1% for girls and 3.8% for boys - which is considered significant! Other scores, including triglycerides and blood pressure, also worsened.