Teaching Wellness
I try to make Dr. Gourmet recipes easier and create just as many that take less cooking time and use less equipment. (This week's Chicken Vindaloo is a good example.) A lot of times those of us who like to cook don't think so much about the amount of equipment we use, because 1. we have it, and 2. the clean up seems worth it.

Ten Tips to Cook Like a Pro (Sort Of)
It's interesting to me that people believe that it's more expensive to eat at home when it comes to a fast food type meal (myth debunked here), but don't have trouble believing that it's less expensive to have a "gourmet" meal at home. After all, pretty much every restaurant looks for the ingredient cost of a meal they serve to come in around 1/3 the amount they charge the consumer.

Shopping The Edges of the Grocery Store: Good For You or Myth?
I was thinking about the idea that shopping around the edges of the grocery store is better for you. It's an idea that makes sense on the face of it. You start in the fresh produce section, make your way along to the fish counter, maybe pick up some fresh meat or dairy products and then to the bakery counter.

Cooking in School has an Impact 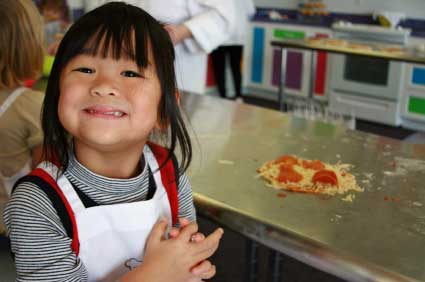 Chefs Adopt a School is a program founded in 1990 by a UK culinary association, the Academy of Culinary Arts. In this program, professional chefs visit local primary schools to present a brief series of cooking-related classes. The idea behind the program is to improve future generations' health by teaching basic food preparation skills along with healthy eating and nutrition. The program reaches about 21,000 schoolchildren each year.

It's a fantastic idea, but in this age of limited resources it's important to make sure the money spent on such programs such as these is truly effective. A team of researchers at the Centre for Food Policy at the City University London noted that cooking initiatives like this one cost over 30 million pounds between 2008 and 2011 and were performed "without any rigorous evaluation" (Appetite 2013;62:50-59), which is like teaching math classes without ever administering a test - there's no evidence that the children have learned anything.

To help correct this lack of analysis, the researchers designed a questionnaire to be administered to students before and after a chef's visit. Children between the ages of 9 and 11 at eight different schools participated in the study, with half of the schools being the control group (receiving no visit from a chef or cooking class) and the other half receiving two visits from a chef.

For each school the first visit from the chef included instruction on the importance of hand washing, healthy eating, and experiencing foods through the various senses, including taste testing different foods. In the second session the chefs led the classes in making a pasta salad that included five different vegetables.

One week before the first chef visit, then two to four weeks afterward, the children responded to questionnaires asking about confidence in their cooking skills, how many vegetables they ate, and whether they felt comfortable asking their parents or caregivers for specific vegetables or other foods.

On the other hand, those who participated in the classes did report eating more vegetables in the weeks after class, and they also reported more confidence in asking their parents or caregivers for specific vegetables to eat. The children also stated in general feedback that they enjoyed tasting new foods and having the chef visit even if they also said that they did not enjoy cooking.

It's clear that more and more rigorous evaluations are worth doing. Just two sessions per year appear to have at least a short-term impact on what children eat - imagine what effects there could be in a more regular class.