Spain: Fast Food vs. Taking Time to Eat
There's another big difference that I want to touch on between Spain and the U.S. and that's fast food. Those who have followed columns on my drgourmet.com website know that I believe consumption of cheap, calorie dense fast food like McDonalds, Burger King, KFC and Taco Bell is one of the major health issues facing us.

Snacking on junk gets boring
One of the ways that scientists are approaching the question of weight control is by looking at what causes people to stop eating. One cause, known as "metabolic satiety," describes the hormonal changes that signal the brain that the stomach is full and eating should stop. Another type of satiety is called "sensory specific satiety," which describes the way that a food you are eating becomes less pleasant or tasty as you continue to eat it.

Air has no calories 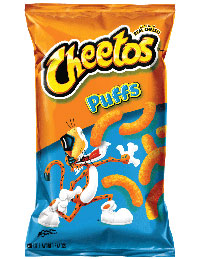 I have previously written on numerous studies that reveal how our perception of food has an effect on how much we consume and enjoy what we eat. One area that has been studied extensively is how we react to the volume of food. Kathrin Osterholt and her colleagues at the Department of Nutritional Sciences at Penn State report on a study where participants were given snacks made with different volumes of air (Appetite 2007: 48(3);351-358).

The snacks were cheese puffs: Cheetos to be exact. The products used were Cheetos Crunchy (less air) and Cheetos Puffs (more air). These two versions have the same amount of calories by weight (5.7 calories per gram). About 5 cups of each version was served to those in the study. To avoid any bias from visual cues the snacks were served in both wide mouth quart bowls as well as the same sort of bag that snacks are usually purchased in.

In this case the subjects responded by eating 21% fewer calories in the Cheetos Puffs even though they ate on average 73% more. The interesting aspect of this result is that participants appear to respond to both the volume and the weight of the snacks What this means is that when presented with a more-aerated snack we tend to be more consistent in the weight consumed even if this means eating a higher volume of the snack.

Even so, by eating a more-aerated food fewer calories are consumed.

I'm not a big fan of snack foods like Cheetos (there's a reason we call this "junk food"). There's a clear correlation between eating these types of snacks and the rise in overweight and obesity.

If you want a savory or salty snack, you are far better off eating nuts, as there is research showing a lower risk of weight gain. If you are going to have highly processed snack foods, however, a good strategy is to choose those with more air as in this study.