Snack right!
A lot of health issues come from snacking and this is because many snack foods are very calorie dense (high calories for small portions). A sweet snack like a Kit Kat bar has 220 calories and 11 grams of fat, whereas only 6 Triscuits are 120 calories and 5 grams of fat. Most such snack foods have little nutritive value.

Make Your Diet More Effective with A Little Something Before Meals
There are all sorts of appetite reduction tips that I hear from my patients. Some swear by chewing gum to reduce their appetite, although at least one study indicates that it doesn't actually affect appetite. People also talk about having a glass of water before meals, and in one study it did seem that having two cups of water before meals helped people lose more weight. On the other hand, it may not be the water that's making the difference: in another study, those who had soup as a first course ate 20% less of the entree that followed.

More on Chewing Gum and Appetite 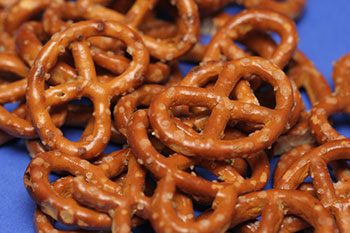 I have patients who chew gum when they are trying to quit smoking but I have had only a few tell me they use gum chewing when they are trying to eat healthier. There's not been a lot of research on this (which I always found a bit odd). In a report in this months journal Appetite two researchers tackle just this very question (Appetite 2007:48(3); 397-401).

The study asked 60 participants to have lunch in a laboratory setting and then return 3 hours later for a snack. During the time between lunch and their snack they were either told to chew gum for 15 minutes one hour later or to not chew gum at all. All of the participants had sessions where they did and did not chew. During the three hours they were also asked to not consume anything except water. Their desire to eat as well as their feelings of fullness were rated after lunch and hourly.

At snack time they were offered either sweet or salty snacks so that over the two weeks of the study all participants had equal combinations of gum or no-gum with consumption of sweet or salty snacks. The researchers had asked for the study subject's gum preferences but the snacks were chosen based on a prior survey of 100 college students about their three favorite sweet and salty snacks.

Those chewing gum reported being less hungry and feeling more full than when they didn't chew in between lunch and snack time. In addition the desire to eat a sweet snack decreased over time. The same effect was not found for salty snacks, however.

The gum chewers did consume less at snack time - not a lot but they ate on average 36 fewer calories. Interestingly, this effect was similar for both sweet and salty snacks even though (as noted above) the desire for salty snacks didn't decrease with chewing gum. Likewise, it didn't matter if the gum was sugar free or not -- the effects were similar.

First of all, this study was sponsored with a grant from the major gum manufacturer Wrigley's. This is, however, a well designed study and different from the research we reported on last month (Appetite and chewing gum, 3/6/07). I would like to see the research extended to include the right of a participant to not eat the snack 3 hours after lunch. Only in a more real world test would we be able to see if chewing gum might really help someone skip the snack altogether.