Does olive oil lose its health benefits when it is heated?
I have read this many times before and there have been people who have written to me about the topic. They have, in fact, been quite adamant that heating olive oil is very bad and unhealthy. The claims range from the heat producing everything from carcinogens contained in the smoke created by heating, to conversion to trans-fats.

Tomatoes, Olive Oil, and Heart Disease
The Mediterranean Diet has been shown to protect against heart disease, but just why it does so isn't quite clear. Its effects have been credited to a variety of foods in the typical Mediterranean Diet, including components of the fruits and vegetables and the red wine. The effects have also been credited to tomatoes and tomato products, which are an important source of lycopenes (an antioxidant - See The Health of It All: Lycopenes). Similarly, olive oil's monounsaturated fats have often been credited with heart-protective qualities. 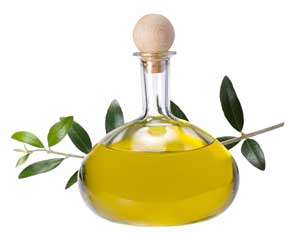 Certainly it would be ideal if everyone could follow the Mediterranean Diet, but it's unrealistic to think that people can make these changes quickly. Lots of factors influence a region's diet, from ethnicity, religion, availability of fresh foods at different times of the year, and more. A group of European scientists decided to investigate just one small change and how that might affect people from various parts of Europe (J Nutr 2007; 137:84-87).

They recruited 160 healthy men between the ages of 22 and 44 whose Body Mass Index was below 30 (obese) and were not on any heart or cholesterol medications. They were separated into three groups divided by the region they were from: Northern Europe (Finland and Denmark), Central Europe (Germany) and Southern Europe (Spain and Italy).

The study tested the effect of daily intake of about a tablespoon of three different olive oils. These olive oils contained low, medium, or high levels of polyphenols, the vegetable compounds that are thought to make olive oil so effective. There were three testing periods: For three weeks each group of men took a daily dose of one of the three types of olive oils in addition to their regular diet, then there was what is known as a "washout period" of two weeks during which they did not have the supplemental olive oil.

After each testing period the subjects' blood pressure was taken, their blood was drawn and their cholesterol levels checked. The most significant results in those men who did not already follow a Mediterranean Diet (presumably those men from Northern and Central Europe) was a reduction in systolic blood pressure (the top number and the one that's often of more concern). Cholesterol scores were also improved in those men who tried to adjust for the additional fat in the olive oil by reducing the fat they consumed in other foods.

It's easier to stick with small changes in your diet, and this study shows just how much of an effect such small changes can have. Instead of using butter (or worse, margarine), use olive oil for searing or pan-frying.