A Little More Fiber Can Help You Reduce Your Risk of Diabetes
More and more children and adolescents are considered overweight or even obese, leading to a related rise in the cases of insulin resistance, pre-diabetes, and type 2 diabetes among children. This is usually attributed to the amount of sugar in their diets combined with the poor quality carbohydrates they eat.

More About Fiber
I write about getting more fiber all the time because it’s really important. There’s no doubt that this is one key to eating healthier and being more satisfied when you do eat. I pay attention to this in every recipe that I research and every ingredient I choose these days. When I am thinking about making a particular recipe I pay as close attention to the amount of fiber as I do to total calories and fats. 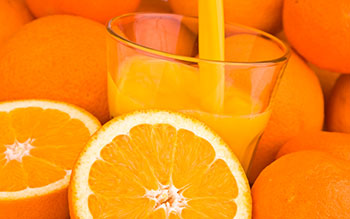 Recently I wrote about a cookie containing plant sterols that effectively improved cholesterol profiles in healthy, overweight volunteers (News Bite 10/03/06). Researchers at the University of California at Davis recently reported the findings of a similar study they performed on the effectiveness of a plant-sterol-fortified orange drink (Am J Clin Nutr 2006;84(4):756-61).

The reduced-calorie orange drink fortified with plant sterols was created by the Coca-Cola company, which helped fund the study along with the NIH and the Beverage Institute for Health and Wellness. The researchers recruited 72 healthy men and women, not on cholesterol-lowering or other medications, to participate in the study, which spanned 8 weeks.

The subjects were randomly assigned to either a placebo group (their orange drink had no plant sterols in it) or a test group (they received the fortified orange drink), and were instructed to drink 8 ounces of the orange drink at breakfast and dinner every day for eight weeks. Their blood cholesterol levels were tested before the beginning of the trial, halfway through the trial, and at the end of the trial.