We know that most all nuts are really good for you, but in one study of pistachios a group of 44 men and women followed a diet where 20% of their calories consumed came from pistachios. When compared to a control group eating a diet without pistachios, neither group gained or lost weight, but the pistachio group had excellent results in the area of their cholesterol profile: their total cholesterol was down, their HDL levels (the good stuff) were up by about 25%, and their LDL levels (the bad stuff) was reduced as well. (Nutr Met & Card Dis. 2006;16:202-209) 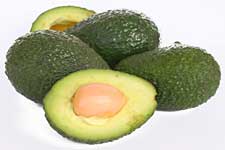 While avocados are high in fat (mind you, good monounsaturated fats), research has shown that there's no risk of weight gain as long as they are used as the fat source in a calorie controlled diet.  (Nutr 21 (2005) 67-75) That study did not show a change in cholesterol either way but there have been research articles supporting an improvement in the serum cholesterol profile in those folks eating avocados.

Other Foods that Affect Cholesterol

We know that good quality fatty fish helps with cholesterol, but what about the oil that it is cooked in? 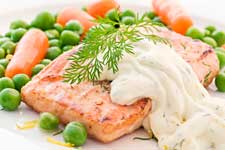 Researchers in the United Kingdom (Nutr 2006;22:1012-1024) recruited 134 men and women between the ages of 35 and 65 whose Body Mass Index was between 25 and 40 (overweight to obese), but otherwise healthy, to participate in a study comprised of a control group and four intervention groups. All groups had their height and weight measured, as well as their blood drawn at 12-week intervals throughout the 24-week study to check their cholesterol scores, particularly their triglycerides.

The control group continued to eat their normal diet throughout the study. The intervention groups received two servings of oily fish (such as salmon or mackerel) or white fish (cod, tuna, or shrimp) per week, along with cooking oils and spreads made of either sunflower oil or canola oil. The subjects completed dietary records on a regular basis to track their intake of the intervention foods. All groups contained about equal numbers of men vs. women and similar BMI levels.

So eating oily fish is key and not what you cook it in. In this and other studies, eating more oily fish such as salmon or mackerel has been shown to be better for you than white fish like tilapia or trout, but in this study it took a little more time to show that benefit in those using the sunflower oil to cook the oily fish.

One study that I love compared a "diet portfolio" of foods that have been shown in other studies to improve cholesterol. These were soy protein foods (such as soy milk and soy burgers), almonds, viscous fiber from oats, barley, psyllium, and the veggies eggplant and okra.

This diet made up of the "diet porfolio" of foods was compared head to head with a low saturated fat diet AND the drug lovastatin (brand name: Mevacor). LDL cholesterol was reduced a similar amount in the group eating the portfolio diet and those taking the drug. (Am J Clin Nutr 2005;81:380-7) That's amazing to me and fantastic that diet can have as much of an effect on your cholesterol as taking medication.