Get Started Cooking with Stews 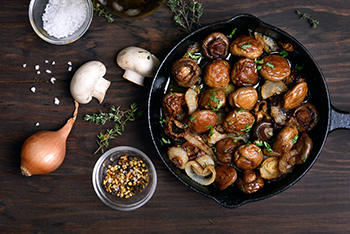 One of the things we teach now across the country as part of Culinary Medicine classes in medical schools, nursing schools, and for practicing healthcare providers, is how to have a different conversation with patients about food. We help doctors and nurses understand that they can have meaningful, actionable discussions in a very short period of time.

When I meet with patients in the examination room they often say they don't know how to cook. You might be surprised, but this is actually the most common response when I start a discussion about food. It is not just in a younger generation, but across the age spectrum.

What they actually mean by "I don't know how to cook" might vary, however. It could be they know nothing about anything about cooking: zip, zero, nada. They might know a little bit but are unsure how to manage on a day to day basis. They might think it takes too long or is more expensive than picking up a meal at the grocery store or a take-out place. Even those folks who know a bit more about cooking will say that they don't have time to cook every night. (Who does? I certainly don't.)

The solution to this is simple: Stews.

You might think that stew isn't very good for you. All that meat and gravy, right? The truth is that it's easy to make a great stew that just happens to be great for you. In fact, it is one of the easiest ways for you to begin cutting back on animal protein while ramping up eating more veggies. Because you need very little meat (if any at all) to make a great tasting stew, you also save a ton of money: the beef, pork, chicken, etc. is, after all, the most expensive ingredient in your stews.

So we have two items down: cheaper and good for you.

The other great thing is that stews are pretty quick to make. Dice an onion, slice some carrots, cut some sweet potatoes into chunks, and toss them in a large pot one at a time with some meat (or not). After that you add a bit of liquid, some spices and herbs, and stir. Cover and simmer for about 60 to 90 minutes. All in all, the prep time is only about 15 minutes for most stews, and after that you just need to stir the pot occasionally. That's not the only place that you save time, however. By making a double (or triple if your family is large enough) batch, you now have a couple of dinners later on in the week, or even a couple of dinners and something to take for lunch.

A third item: it actually takes less time and it's both less expensive and better for you.

But let's get back to the fact that you may not know how to cook or not feel very confident in making meals. The great thing is that it's a stew. It is almost impossible to mess up. It offers you a great opportunity to practice some knife skills and learning to taste your stew and adjust the seasoning to your liking. It is basically cooking with training wheels. The finished product is not really supposed to look very elegant: it's a stew, after all.

Here are some simple ideas for stews to help you get started:

The same thing holds true for chili. Easy to cook, cheap, delicious, and it's easy to become a master. Start with one of these stews and move on to chili. Make a double batch and you are good to go. Pass this on to a friend who you think should begin cooking and share some recipes with them.