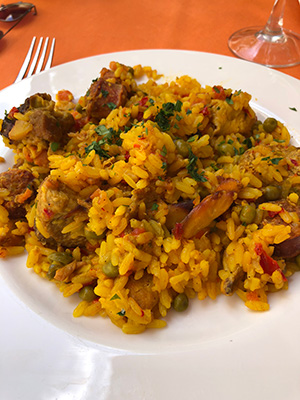 The very name paella seems exotic - more so than risotto or arroz or even fried rice, which all seemed very foreign once upon a time. In most cuisines around the world, rice in one form or another remains a staple of the diet, and consequently, the culture and cuisine. In Spain that means paella.

As with other rice dishes around the world, there are multiple variations on paella. The truest is likely Valencian paella (where it is generally agreed that paella originated). This is a mixture of chicken, fava beans, saffron, paprika, green beans, and rice, and technically not just any rice, but calasparra rice from the Murcia region just south of Valencia. It is a short-grain rice that is especially absorbent and makes cooking simple: place the ingredients in the pan, add the liquid of your choice, and simmer.

The simplicity of preparation is part of what makes paella so special. This is almost a set-it-and-forget-it dish. The only thing you really need to do is add a bit more liquid as needed.  The exception to this is in the case of paellas with seafood, where you add the seafood ingredients - whether shrimp, mussels or clams, fish, or squid - to the top of the dish later so they don't overcook. In Spain paella is cooked across the country now at festivals in large - 5 and 6 foot diameter - pans in open air stalls. 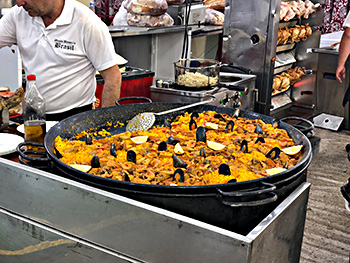 As with any festival food, the quality of the paella can vary widely depending on ingredients, seasoning, cooking time, and whether the chef is any good or not. I have had some fantastic paella at festivals and some that is truly awful.

This tenet holds true in restaurants as well. Even though the recipe is quite simple, it can easily be ruined. In some cases the liquid comes from a carton complete with the infused saffron and spices - the fast food version of paella - but in small tapas bars and bistros the paella is cooked to order in a single serving pan the size of an individual pizza dish. There is simply no consistency.

You can make your best recipe by starting with the right rice. If you don't live close enough to a store that is going to carry calasparra, you can buy calasparra rice at Amazon as well as saffron.

The rice is relatively inexpensive, but saffron seems quite pricy - at least $9.00 per gram. I generally purchase less expensive Persian saffron and have always been happy with the quality. I am very careful about how I use it, however. I prefer to steep the saffron threads in hot water, essentially making a tea, and then adding that to the dish I am cooking. Per serving, about 10 threads is enough to get a fine color and flavor for your dish.

Paellas should be cooked in a pan that is broad and shallow. You don't have to have a special pan - a large skillet will do. The pan should, however, be big enough that the rice isn't in a very thick layer in the pan - no more than about 3/4 of an inch.

The classic Paella Valenciana generally includes game meat, such as rabbit and duck, but chicken and pork are often found in recipes. You can substitute any of those in any combination for the chicken and have a great dish. Note that broad beans, or favas, are also traditional, but they're not widely available in the U.S.. Instead, you can use a large white bean, such as cannellini beans. Similarly, you can substitute regular green beans for the large, flat green beans that are more traditional.