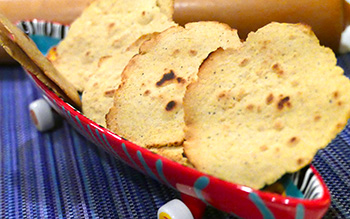 I love papadum. This Indian bread (cracker) made with lentil or chickpea flour is crispy, light, and airy. The best ones that I have had were in London and on the last trip there I promised myself that I would come home and make them. This is a big deal because I am not a baker. I don't mind messing around with flour and dough but it's just not what I love doing. Mostly because it is so exacting: baking is more chemistry than cooking. If you make a single mistake in a single ingredient, it's likely that the recipe will be a failure.

The great thing about these is that it is really more like making pancakes. Also, because the papadum are unleavened and toasted or deep fried it just seems a lot easier to me - more like cooking than baking.

I spent a lot of time looking at recipes. I do this when I want to cook something that is new to me because I want to adapt and interpret it in a way that makes the recipe easier for my readers - more familiar and easier to accomplish. The first thing I noticed is that most of the recipes call for lentil flour, but many do use chickpea flour. Lentil flour is not widely available in the U.S., but chickpea flour is, so I opted for the simple route.

The other big issue is, as with most baked goods, the amount of liquid. Every recipe used a lot less water than I expected and I was dubious, but it does turn out well. It does take working the dough and taking your time. I started with two tablespoons of water per cup of flour. This is just barely enough and really takes working the dough with your hands. Using wet hands both keeps the dough from sticking to your fingers and also adds just that little bit of extra moisture needed.

In the end, the dough should be about the consistency of Play-Dough.

Adding the roasted garlic is optional, but I have tasted papadum that are garlic flavored and they are fantastic. You could use a bit of garlic powder, but if you are not going to use either, add a bit more pepper or even a tad more cumin (be careful because it's easy to overdo the cumin and they will taste bitter).

After they were rolled into the little balls I tried a number of ways to roll them into the thin pancakes. Because the dough is a bit sticky, this is challenging, and I landed on the light spray of oil prior to sandwiching the ball between wax paper. This works like a charm and the little bit of oil helps give some added color to the crackers when you are toasting them.

Using a non-stick griddle makes this effortless. As I said, I would prefer to not deep fry, partly because of the added oil but also because of the mess that it creates. When you are cooking them on the griddle it needs to be quite hot but not so hot that the pancakes burn instantly. The griddle is the perfect temperature when the papadums begin to puff from below with the top surface showing a few domed bubbles where pockets of air are being trapped from below.

There are a lot of recipes that call for drying the papadums prior to cooking them. Some suggest a low temperature oven or dehydrator - one recipe even suggested drying them in the sun. I found that when cooking them and serving immediately off of the griddle they were not crisp enough, but placing them in an oven that had been preheated to warm (about 160°F), then turning off the oven and leaving them overnight, resulted in perfectly crisp crackers.

All of this sounds like a lot of work but to make a batch, but it took me about 30 minutes start to finish. Well worth it for these lovely, crisp crackers that are so full of flavor and great ingredients that are great for you.

Here's the recipe for Papadum.