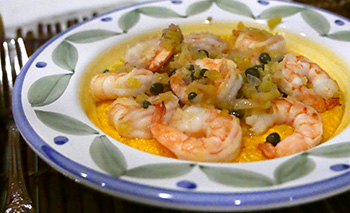 I spend a lot of time these days traveling around the country and talking about the Mediterranean diet. I have spent years working at reviewing the research literature and helping translate the principles of the Mediterranean diet for the American kitchen. That's pretty easy because the nine principles are easily applied to things like tacos, spaghetti, shrimp and grits, clam chowder, Caesar salad, and burgers. The goal is always to create the best possible food that just happens to be healthy.

In truth, many of those familiar dishes have their foundations in recipes from places such as Spain, Italy, Greece, and Africa. Tacos come to us by way of Spain through Central America. Spaghetti sauce and pasta that we think of as American originated in Italy. The point is that we have adopted a lot of cookery as our own, sometimes bringing an American twist and other times just copying it directly from the original. Many ingredients that we use now have become commonplace in our groceries, but they were not easily found 30 to 40 years ago. Items like yogurt, cilantro, coarse ground mustards, and crimini mushrooms are common now.

There are, however, a few ingredients that are widely available but have not really made it into common use in the same way as, say, sun-dried tomatoes have and that is capers.

Capers are the flower bud of a bush from the family Capparidaceae. They are cultivated in the hot climates of the Mediterranean and Asia and the immature flowers are picked and then pickled in vinegar brine. They are bland when raw but pickled capers are pungent with a sharp piquant flavor. Capers are generally sold by their size and the most common found in the U.S. are the smaller ones - under about 7 millimeters in size and sometimes labeled non-pareil. Larger caper classifications include the surfines (7 to 8 millimeters), capucines (8 to 9 millimeters), capotes (9 to 11 millimeters), fines (11 to 13 millimeters) and grusas (14+ millimeters).

Because they are pickled, capers are a bit salty, but they are so flavorful and their taste is so distinct, it makes sense for them to become more a part of your pantry. Best of all, they keep really well and it takes only a teaspoon or so per serving to add a lot of terrific flavor to your dish. The vinegar based brine brings a brightness to your dishes, and while capers are high in sodium, because of the combination of the saltiness and the bright flavor, you won't need much, if any, added salt in dishes you add them to.

You can experiment with using capers where you might use pickle relish to bring a different flavor to your dish such as tuna salad or tartar sauce. Here are a few other recipes that you can try using capers: